Whoopie pies, don’t panic if you haven’t heard of them, not many people have.  I read an article about two years ago regarding upcoming food trends.  According to the author, whoopie pies were going to be the next big thing in Australia, move over cupcakes and macarons.  Like you, I am still waiting for the trend to hit.

About 12 months ago, I did think “here they come….” when Betty Crocker mixes appeared in the baking isles of Coles, but I am yet to see ready to eat whoopie pies anywhere.  You can buy ginger kisses from Woolworths and Coles, not called whoopie pies, but they are a mini version and have been available to for purchase for donkey’s years.

Whoopie pies are two round domed cake like biscuits which are stuck together by a creamy frosting style filling.  They are considered to have originated in Pennsylvania by the Amish.  That is unless you are from Maine or New Hampshire who also claim their origin.

I have been wanting to make whoopie pies for a while, and what better excuse to bake a very American cookie/cake than an extremely American celebration, Halloween.

I remember as a child yearning to go trick or treating as they did on the American TV shows.  Nobody did that in Australia back then, it was just another day.  Even when Josh was young it wasn’t popular,  but over the past few years the amount of trick or treaters coming to my door on All Hallows Eve has grown.

These whoopie pies are minis which are perfect for kids.  They do include dairy, eggs and chocolate, so may not be that kid friendly for those that have food intolerances.  Just as Halloween didn’t exist when I was a kid, nor did the vast array of food intolerances you see today, but that is another story for another time.

Chocolate and pumpkin may sound like a strange combination, but it works.  The cookie/cake part of the pie is very similar to a chocolate cake recipe.  The filling is awesome!  Sweet pumpkin filling with cinnamon and nutmeg.  Cream cheese is also used in the filling, and upon tasting it I just wanted to make a pumpkin cheesecake, seriously good stuff.  You could even pipe the filling in to chocolate or plain tart cases, top with crushed toffee pecans.  Yes I think I may give that a go too. 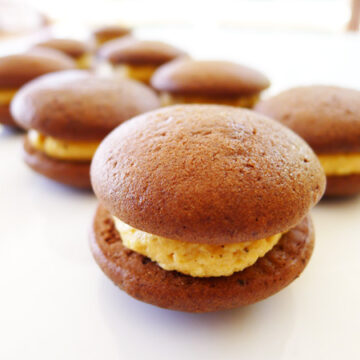