Wishing everyone love, peace and happiness for 2010. I also want to thank those who have been following me for the past few months and also to my fellow bloggers who have been welcoming and supportive. I am excited to see what my 2010 will bring food wise to share with you all.

I was just thinking to myself that it is fitting my first post for 2010 is my last meal created for 2009.

We stayed home for New Years Eve this year. As it was only going to be the three of us, hubby, junior and myself, whoops forgot the four legged family member, Sally! Scratch that and make it the four of us. I decided to try my hand at a six course meal. No stress as no visitors turning up at a certain time and the meal could extend to how every long it took me, all up we were eating for about three hours. We started at 5.30 and were finished and cleaned up to watch the Sydney fireworks at 9, too perfect.

It all went so smoothly with the boys cleaning up in between courses as I put the finishing touches on the next one that had been prepped. Total team work! 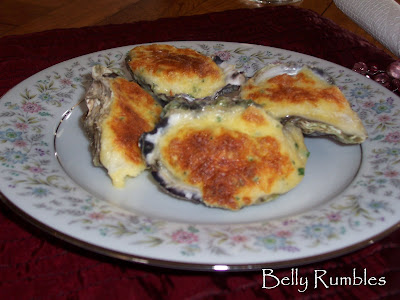 A recipe that has been tried and tested many times and was passed on to me by Mum. Cheesy fluffly chive topping grilled on top of the oyster. Junior does not like oysters natural so is a nice compromise as I would be happy to woof them down natural with just a little bit of vinaigrette. 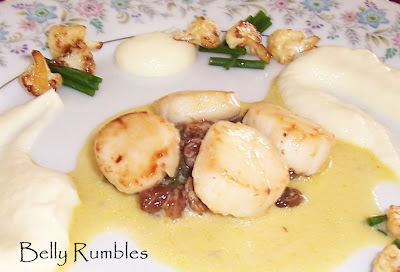 This was the first time I had made this dish and to make it even more exciting for myself there were a few components to it and a couple had to be last minute. Cauliflower puree where the cauli had been cooked in milk, I had never done this before, yes I know everyone else probably has. A complex sauce with sultanas and capers (sadly my butter split a little from the sauce, not too much but on close inspection you could tell). Little baby cauliflower trees which were caramelised. All finished off with perfectly cooked scallops. Really was a lovely combination of tastes and a dish I will be making again. 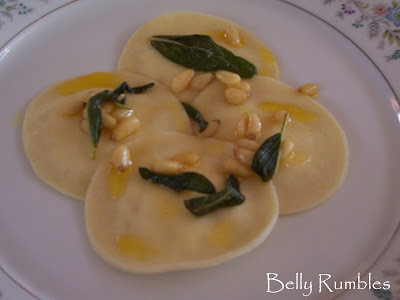 Was a little disappointed I didn’t brown the pinenuts as much as I would of usually, but still it was a lovely dish. The crab and ricotta teamed with a little lemon zest was so light and fluffy inside the ravioli. 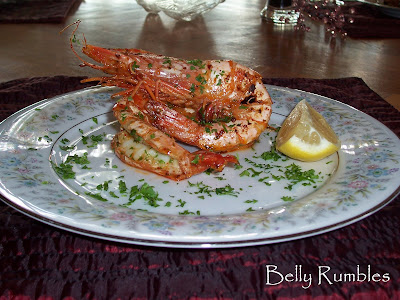 Found some lovely tiger prawns at the fish mongers, nice and big, which looked very impressive on the plate as the shells were left on. The prawns were sliced down the back to de-vein and clean and then stuffed with the butter mixture. I did cook them in a pan, but I really think they would be perfect on the BBQ and will be trying them this way next time. 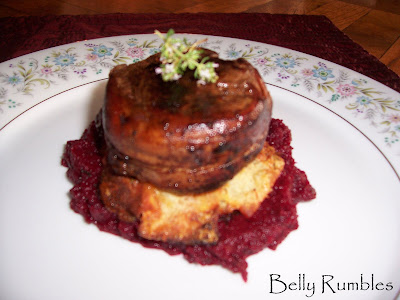 The beef was so tender, juicy and just plain delicious. My potato galette on the other hand was a flat and too crispy poor excuse for a galette and promptly got hidden under the beef fillet instead of being a stand alone item on the plate. I got my timings a little out with the potato and well they just went bung. Tasted fine, but not the reslult I wanted, were more like potato chips. I was happy with how the beetroot puree turned out as I cooked the beetroot with thyme, shallot and port before pureeing, was quite happy with this experiment. Topped the beef with thyme flowers from my garden as I felt the dish needed a little green to it. 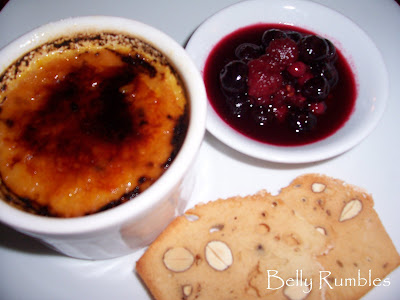 Normally I hum and har about what to make for dessert, but not this time, as I just really had a hankering for a plain old vanilla creme brulee. Oh wow, oh wow, oh wow. Even though i got a little too pyromanic with my blow torch, I ceased just before burning the toffee. Actually was pulled off the brulee by junior as he could see his dessert being turned into cinders. Can’t help it, the flame it is pretty, mwahahaha. The fruit compote on the side added a nice little bite.

In the end I was a very chuffed Belly Rumbler with a full tummy.