Vegan rum balls, paleo rum balls, whatever you want to call them these balls are healthy for you.  This recipe doesn't use traditional rum ball ingredients, but they allow you to have a guilt free rum ball hit.

Traditionally rum balls are made with chocolate, cream, biscuit or cake. Considering we only eat them very occasionally it really isn’t an issue. All things are good for you in moderation.

Ever since making the healthy choc chip balls I have wanted to play around with creating a healthy version of a rum ball. Basically they are similar to other date based healthy snack balls, but I have incorporated some evil rum into the mix. As rum is fat free I feel it can’t be too bad for you.

There is a quarter of a cup of rum used in this recipe. With an extra tablespoon splashed in at the end for a bit of an extra rum kick. If you prefer your balls on the mellower rum side, leave that last splash of rum out.

With the addition of some silver leaf to half the balls more of a Christmas feel was achieved. Josh thought they looked like mini Christmas puddings. By rolling some in cacao powder they have an extra chocolate kick. Of course you could leave them plain without the silver leaf or extra cacao, but where’s the fun in that? 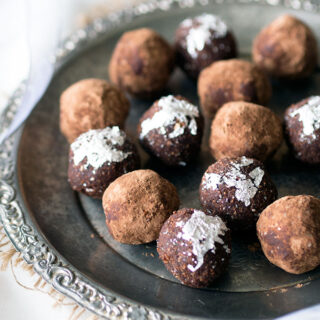 Serving: 1gramsCalories: 58kcalCarbohydrates: 9gFat: 2gSaturated Fat: 1gFiber: 1gSugar: 6g
Did You Make This Recipe?I do a happy dance when people share how they went. Tag me on Instagram or Twitter @bellyrumbles & #bellyrumbles

I discovered date syrup the other day and I have been using it in my morning breakfast smoothie for a hint of sweetness. Goes so well with banana. I used the date syrup in these to keep them vegan, but if you aren’t vegan and don’t want to go out and buy date syrup you can use honey.

These are pretty good for you, and I'm sure I could probably find a medicinal purpose for the rum if I tried really hard.  They in no way compete with rich decadent rum balls, but they are a fantastic alternative if you are being very strict with your eating habits and diet, or you just don't eat ingredients that are found in traditional rum balls.