Char siu kangaroo, it rolls off the tongue doesn’t it.

I ended up singing a weird kind of char siu kangaroo chant as I bopped around the kitchen preparing the marinade and trimming excess fat from the kangaroo fillet. Okay, that’s a blatant lie. There is hardly any fat in a kangaroo fillet.

Kangaroo is one of the healthiest red meats that you can purchase. It’s incredibly lean with fat levels of around 2%.

Why don’t more Australians eat Kangaroo? I blame Sonny Hammond for that, if you are over 35 there is a good chance that you have the Skippy Syndrome. Plus kangaroos (if you’re not a farmer) are as cute as all get out.

For those of you that didn’t grow up with Skippy the bush kangaroo, it was a television series that went to air between 1968-1970. When I was old enough to watch it, they were repeats, but still was a popular program for me as a kid.

I actually caught a rerun recently and oh boy, it really is a perfect example of terrible Australian television. Not sure if it was the bad acting or the kangaroo paw back scratcher used to turn something on, off, defuse something etc etc when Skippy was saving the day. Tsst tsst tsst tsst (kangaroo sounds), what’s that Skip? Sonny’s fallen down a well/fallen off a cliff/is being held captive by bank robbers (again)?

Thanks to my childhood the Skippy Syndrome is strong with this one. Mainly as I thought I was a female version of Sonny (Skippy’s best friend) and spent my youth tracking, getting up close and personal and trying to become besties forever with the local kangaroos at our holiday house. Important note I never fell down a well/fell off a cliff/or was held captive by bank robbers.

I did spend hours tyring to convince the local wild kangaroos that I was a nice person and they wanted to come on adventures with me. As you can guess they just kept chewing grass and looking at me like I was a dickhead. Eventually I annoyed them enough that they lazily jumped away.

I will admit that I don’t cook with kangaroo regularly at home, but I do eat it out on the rare occasion. One of my most memorable dishes I’ve had were some rather tasty barbecued kangaroo skewers with sticky chilli jam.

The one thing about writing a food and travel blog is that you get out of your comfort zone. Being an Australian website, I wanted to have at least one kangaroo recipe on Belly Rumbles. My first instinct was to go down the Australian native herb route, but that would have been pretty predictable for me. I may do so another day in the future, instead a bit of Chinese Aussie fusion went on.

There was one aspect of cooking kangaroo this way that worried me. It is recommended that kangaroo be cooked on the rare side. Being a lean meat, cooked well done will make it tough. But I didn’t want a rare result for this particular dish, as it would be kept and eaten cold over the course of a few days.

In the end, my cooking times provided me with char siu kangaroo that was medium. By the time the roo had rested, it was still slightly pink in the middle but cooked.

You can use char siu kangaroo in a variety of dishes. Just remember that it is a game meat and stronger in flavour than char siu pork. It would go perfectly in a noodle or rice dish, even in a salad.

I ended up making char siu kangaroo bao, simple ones with lettuce, green onion and a smear of hoisin sauce. The bao I had in the freezer. You can purchase them ready to use in the freezer section of good Asian grocery stores. They are a staple in our household.

As kangaroo is darker meat than pork, I did use food colouring for the kangaroo you see in the photos. I wanted to create a definite red tinge to the outside of the meat. Please feel free to leave the colouring out, it is for aesthetics only and does not alter the taste of the char siu kangaroo.

Do you cook with kangaroo at home or order it when dining out? Or are you like me and suffer from the Skippy syndrome. 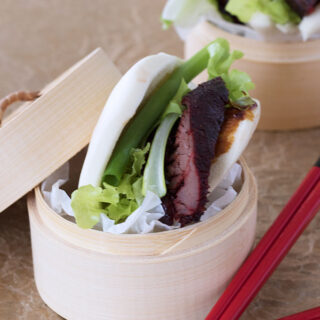 Did You Make This Recipe?I do a happy dance when people share how they went. Tag me on Instagram or Twitter @bellyrumbles & #bellyrumbles
« Two Ingredient Banana Pancakes
Cruise Food - Dining on the Sea Princess »