Making sushi rice in a rice cooker is the easiest way to make sushi rice. It's no fuss and no stress. This method will have you making sushi at home like a pro in no time. It's a game changer.

Sushi rice is also called vinegar rice, or in Japanese, shari. It is the "bones" of delicious sushi.

I was taught how to make sushi rice by Chef Hideo Dekura eons ago. Dekura is a Sydney based Japanese chef and cookbook author, with an awesome sense of humor. If you are ever in Sydney he also teaches Japanese cooking at his cooking school, Culinary School Dekura.

What Chef Dekura didn't teach me was how to make sushi rice in a rice cooker. What a revelation gaining this little bit of knowledge has been.

I use to dread making sushi rice. Cooking sushi rice in a rice cooker is considerably less stressful than the pot and stove method. I now make it at home all the time.

This sushi rice recipe that will give you perfectly cooked and seasoned rice every time.

A full printable recipe card can be found at the end of this post with recipe ingredient measurements and method.

What is Sushi Rice?

Though there are over 40,000 varieties of rice on the planet there are two main types of rice grown around the world. They are the Indian variety (Indica) and the Japanese variety (Japonica).

The rice produced in Japan is mainly Japonica and it is a short rounded rice grain. It comes in both glutinous and non-glutinous forms. Japonica rice has a higher moisture and amylopectin starch content.

This is the reason behind its unique stickiness and texture. Which is perfect for keeping its form when making rolled sushi or hand shaped sushi called nigiri.

Why use a rice cooker?

An obvious question to ask for those who don't own a rice cooker. For those of us that do, it is a case of, "if you know, you know".

The main advantage of using a rice cooker over the stovetop method is control and identical cooking conditions every time you go to make rice.

There is nothing wrong with using the pot and lid method. It has been made that way for centuries. A rice cooker simply makes the process foolproof.

The rice is cooked at the same temperature, there is the same amount of evaporation, and the cooking pot is the same each time. Human interference is taken away.

Measure your rice and water ratios properly, follow the before and after instructions, and bingo, perfect sushi rice.

What type of Rice Cooker to use?

It took me a long while to add a rice cooker to my army of kitchen appliances. I thought "what's the point" when I could easily boil up some rice on the stove. I bought one and have never looked back. It is one of the most used appliances in my kitchen.

I personally own a Panasonic 5 cup Rice Cooker which has been perfect for my needs. Only has 4 buttons and cooks rice like a trooper. Though I will probably purchase something a little fancier next time around.

Tiger and Cuckoo Rice Cookers are popular here in Australia. As well as the better known brand Tefal and Philips. All these rice cookers have a few more bells and whistles than my basic Panasonic.

If you are in the USA you are a lucky duck, you will be able to get your hands on a Zojirushi rice maker (voltage not compatible in Aus), Hitcahi, as well as the others I have mentioned above.

Some rice makers do come with a sushi setting. Mine doesn't therefore I cook my rice as I would normally, with an extra step included. The extra step? I soak the rice.

You have two choices when it comes to seasoning sushi rice. Make your own seasoning using rice vinegar, sugar, and salt, or buy it premade.

I've always made my own sushi rice seasoning. But as you can see from the above image, I do happen to have a bottle of sushi seasoning in my pantry (how it got there I have no idea).

There is nothing wrong with using premade. I simply like one less bottle in my pantry.

You can use the cup that comes with the rice cooker. This is smaller than a standard cup measurement. Just remember whatever measuring device you use the ratio is the same, 1:1

Important to remember that the measurement of rice is before it is soaked.

How to use sushi rice

Obviously for making sushi, and with quite a few varieties you will never get bored. Feel free to also serve it as a side dish as an alternative to steamed rice when making yakiniku at home or other Japanese recipes.

How to Make Sushi Rice in a Rice Cooker

Scroll to the bottom of the page for a printable version of this recipe.

Sushi rice should be toothsome and sticky, not soft and mushy. Each individual grain of Koshihkari is glossily coated in sushi seasoning. The rice grains should look individual while sticking together and retaining their form.

Wash the rice: Wash the rice well. Chef Dekura taught me to wash it in a fine strainer under cold running tap water until the water ran clear. I use to do this, I no longer do. But if you want chef quality sushi rice then listen to the master.

I place the rice in the rice cooker bowl and cover it with cold tap water. Give it a swish around and then strain. I repeat this three times. The water will not be 100% clear, but it will be close enough.

Soak the rice: This is something that I learned to do over time when making sushi rice in a rice cooker. Place the rinsed rice back in the rice cooker bowl and cover it with water. Leave the rice to soak for 30 minutes.

By doing this step the rice grains will have a better texture once cooked.

Drain the rice well: Place the rice in a fine mesh strainer and allow excess water to drain away. Then place the well drained rice back into the rice cooker bowl

You can see from the above how soaking the rice has given it a different texture, it almost looks chalky.

Cook the rice: Cover rice with water and place the bowl into the rice maker. Cook as per your rice maker's instructions. The rice maker's "fuzzy logic" does all the hard work for you.

The cooked rice: Once the rice has finished cooking remove the bowl from the rice cooker. The rice grains will be defined and sticky.

Cooling the rice: It is very unlikely that you will have a cypress hangiri in your kitchen (a Japanese wooden bowl specifically designed to cool and season sushi rice.) I don't but it is on my wish list.

Instead, I use a large enamel coated baking dish with low sides. A large low sided plastic container would work too.

The idea is to stop the rice cooking. Spread the rice carefully out in your chosen container. Don't mush it, use the rice paddle that came with your rice maker or a wooden spoon.

Add the seasoning: Pour the prepared seasoning evenly over the warm sushi rice.

Season the rice: Carefully using a wooden spoon coat the rice evenly with the seasoning. Gently mix the seasoning through as you don't want to mush and crush the rice grains.

Cool the rice: Using a handheld fan, piece of cardboard, or even a small electric fan, cool the rice as you mix through the seasoning until the rice is at room temperature. Each grain of rice should be coated in seasoning and will take on a glossy appearance.

Keep rice in a bowl covered with a clean damp cloth until ready to use. If not using within the hour, place rice in the fridge in a sealed container. Rice is best used the day of making but will last in the fridge for 48 hours.

Can I use brown rice to make sushi rice?

Surprisingly brown rice works rather well to make sushi rice. It won't have the same texture and the taste will be nuttier, plus it won't be as sticky. Brown rice should be used for rolled sushi only, not hand-formed sushi such as nigiri.

Can you freeze sushi rice?

No. It is as simple as that. By freezing sushi rice you will change the texture of the rice. Sushi rice is best used on the day of making.

How long can I keep sushi rice in the fridge?

Sushi rice is best used on the day you make it. It can be kept in the fridge for 24-36 hours. 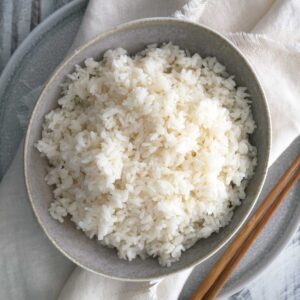 Recipe Author: Sara McCleary
Making sushi rice in a rice cooker is the easiest way to make sushi rice. It's no fuss and no stress. This method will have you making sushi at home like a pro in no time. It's a game changer.
5 from 3 votes
Print Recipe Pin Recipe
Prep Time 10 mins
Cook Time 30 mins
Rice Soaking 30 mins
Total Time 1 hr 10 mins
Course Rice
Cuisine Japanese
Servings 6
Calories 265 kcal

GENERAL COOK’S NOTES All oven temperatures are fan-forced, increase the temperature by 20 Deg C (70 Deg F) for convection ovens. All measurements are Australian tablespoons and cups. All measures are level, and cups are lightly packed unless specified. Herbs are fresh | Vegetables are of a medium size | Eggs are roughly 60 grams in weight (large).   NUTRITIONAL INFORMATION BELOW IS A GUIDE ONLY