Winter hasn’t quite hit us Sydney siders yet, still a couple of more weeks to go. At the moment if the sun is out, days are still very pleasant, and I haven’t been put off braving the outdoors for a good barbeque yet.

Of course if you live in Northern Australia, it never gets cold. In fact the wet season is over and it’s perfect barbeque time. Plus my American friends are just clawing their way out of a pretty cold and miserable winter.

Really, it’s the perfect time for everyone to barbeque!

No, I’m not touting some new barbeque range, my love of barbequing is pure and untainted. I’m one happy girl sitting outside, glass of wine in hand, engaging in good conversation, whilst the smells of what’s to come wafts through my nostrils. Dishes cooked on the barbeque always seem to have their flavours heightened. It really is one of the most relaxing ways to enjoy a meal with your nearest and dearest.

Usually when I throw a prawn on the barbie, they have been marinating in something inspired by South East Asian flavours. Usually a good dose of chili, ginger and sometimes garlic makes an appearance. This time I wanted to prepare my prawns as Australian as I could.

I picked up some large fat Australian prawns from the Sydney Fish Markets. The beautiful quality really inspired me to make them a truly Aussie barbequed prawn.

After a rummaged through my spice shelf I dragged out all the native herbs and spices I had. It was a deep thought moment looking at all those packets, probably too many packets. To add to herbs and spices, I used Australian honey, macadamia nut oil and rum. The macadamia nuts add a lovely texture to the outside of the prawns.

I can hear some of you saying that rum isn’t Australian at all, more at home in the Caribbean. You’re right, Aussies didn’t invent rum and it wasn’t found as a natural source gurgling from underground springs.

But we are probably the only country in the world to have had a military coup over the stuff. Governor William Bligh upset the NSW Corps (nicknamed the Rum Corps) back in 1808, by not allowing the trade of goods for anything else but currency (notes and coins). At the time there wasn’t a lot of cash floating around, and for members of the corps and others to survive, bartering goods was a common necessity. The NSW Corps used rum a great deal as a form of currency. Understandably they got a little upset and overthrew Bligh and the government on January 26th 1808. Known in history as The Rum Rebellion. 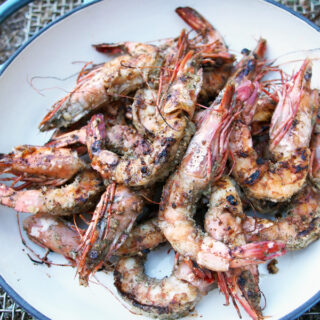 It is getting easier and easier to use ingredients which are uniquely Australian. Native herbs and spices are now readily available to purchase through various suppliers on the Internet, just ask Mr Google. Quite a few delicatessens and even some supermarkets are now stocking some.

What’s your favourite way to cook prawns on the barbie?