There’s something fun about making beer can burgers. The moulding of the burger mixture around a beer can remind me of a craft project. Then you wrap it in bacon and stuff it with whatever your heart desires. It is very hands on.

Originally the beer can burgers were destined to be barbequed. Unfortunately the weather had other ideas and the result was baked beer can burgers. Not much fun having a BBQ in the pouring rain.

You could say that these baked beer can burgers have an Aussie influence. I couldn’t resist adding egg and pineapple. A generous wrap of bacon around the outside completed the picture. All that was missing was beetroot, but that is easily added to the side salad. Or add some beetroot to the burger if you are putting them in buns.

My super easy Chili Plum Sauce would be great with these too!

What you stuff your baked beer can burgers is only limited by your imagination. Think mushrooms, feta, fresh herbs, olives, tomato, and various other vegetables. It's endless with what you can stuff them with. Spice up the burger mixture with a touch of curry powder or other dried ground spice.

I have kept them relatively simple, but sky’s the limit!

What would you stuff your baked beer can burgers with? 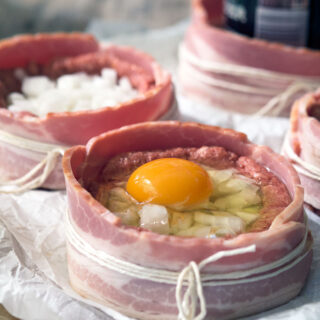 These burgers can be cooked on the barbeque.