Filipino empanadas, another snack food I fell in love with when visiting The Philippines last year. I shared a recipe for Filipino lumpia a little while back, another favourite from our food tour of Manila's Chinatown. On this tour is where we also tasted delicious Filipino empanadas.

As with the lumpia, I researched to find an empanada recipe that was close to what was tried. And like the lumpia recipe, I ended up taking bits from one recipe and bits from another. Trial and error until I finally came up with something close to what we tried.

These empanadas have a slight sweetness as Filipinos do love that a little added sweetness in their food, including savoury. The filling of these Filipino empanadas is fantastic, but I am extremely impressed with the pastry.

Most of the recipes I can across used butter or oil in their pastry. Due to the fine little fried air bubbles that were on the surface of the empanada I tried in Manila, I had a very strong feeling they used lard. After playing around with pastry recipes, I am pretty sure I was right.

I say “secret ingredient” in the title above, but “forgotten” would be more accurate. It’s no secret lard is magical in pastry recipes. It makes for a flaky and light pastry. Due to not being a healthy fat, it has lost favour with home cooks. I know I rarely use it.

Don’t be put off by the smell of lard, it’s not that appealing (to me anyway). But it is worth using for the final result. It also loses all trace of smell and taste on cooking.

That’s the beauty of using lard. Unless you have made pastry with it, you are none the wiser as to why the pastry is so good.

I highly recommend you don't make this recipe with butter. Because if you are going to the trouble of making these Filipino empanadas, use lard for a fantastic result. Plus I want to challenge you a little.

As mentioned in the notes in the recipe, the cooked empanadas can be frozen. Makes sure they have completely cooled before freezing. I simply put some in a ziplock bag and froze them. To reheat them, it was a case of straight from the freezer to a lined tray and the oven (medium heat). Until heated all the way through and crisp.

You can also check out my folding technique on Instagram, for a bit of guidance.

Don't forget to have a look at my Filipino lumpia recipe, and also our exploration of the tasty treats we experienced in Binondo, Manila's Chinatown.

If you make and enjoy this recipe, or any of our others, tag us in the photo on social media. Would love to see what you have made! 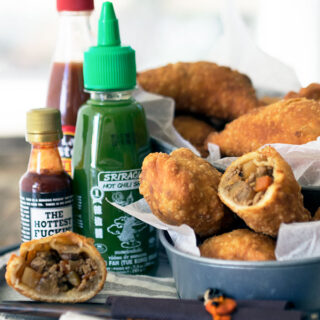 Rubbing the lard into the dough Take pieces of lard between your finger tips and then rub the lard together with the flour. Lift the mixture up as you rub it to keep it as cool as possible. Do not use the palms of your hands, as you don’t want the lard to melt. Shake the bowl now and again to bring the larger lumps of lard to the surface. Continue until all the large lumps have been incorporated into the flour and the mixture resembles fine breadcrumbs. Sealing Empanadas If you don’t want to fold and crimp them you can just use the prongs of a fork to seal the empanadas. Push the fork prongs down on the edges of the empanada to seal. Yes, you can freeze these! Empanada can be frozen once they have been cooked and cooled. Warm them up in the over from frozen.