Aren’t the photos of my perfectly risen black truffle and parmesan souffles delightful? What you can’t see them? You can only see deflated saggy looking excuses of this classic French dish? Hold on, don’t go scrolling down the post to find the perfectly risen money shot, there isn’t one.

Instead you will find a “but a dog ate my homework” excuse for those not so perfect puffs, but I'll get to that shortly. Before we get to my excuse I want to tell you about some dogs, that don’t eat homework or the Perigord truffles (French winter black truffles) they hunt.

Abbie and Tom are the two hardest working members of the Red Earth Truffles team. Red Earth Truffles is a family owned and run farm based in the Southern Tablelands of NSW. They also grow olives and have a small livestock holding which includes lambs, and it just happens to be lambing season at the moment. These guys certainly have their hands full as the truffle and lambing seasons collide.

Abbie is a two and a half year old Rottweiler that has a scenting and tracking pedigree. The other half of the truffle foraging team is Tom, a three and a half year old Australian cattle cross kelpie, or something like that. They aren’t quite sure as Tom was rescued at six months of age from the animal shelter.

Abbie and Tom are both characters. Abbie is very much the family dog, loving, loyal and protective. When not working she loves spending her time frolicking in the paddocks getting covered in grass and dirt. She is also a big sucker for food and treats. Tom on the other hand is a bit of a goof ball, but also very loyal and loving. They both love hunting for truffles.

That above paragraph almost sounds like Belly Rumbles is turning into a doggie dating web site. Thor likes to eat chicken, relaxing in front of cosy fireplaces and long walks on the beach……….

Truffle dogs aren’t born with the gift of sniffling out truffles. They undergo specialist training to hunt truffles. Unlike truffle pigs, Abbie and Tom know not to eat their discoveries. Instead they are rewarded with treats and play.

When it is truffle hunt time the dogs are let loose in the truffiere and are all very quick to pick up the scent of the Perigord truffles. When they find a truffle they paw the earth on top of where the truffle is growing. If the truffle is deeper down they will dig a little bit and then wait for the human half of the team to arrive to carefully remove the soil from around the truffle.

As clever as the Abbie, Tom and Hunter are, a human nose is still needed to ascertain if the truffle is fully ripened before digging it up. If the truffle isn’t quite ripe enough then it is covered with soil again, the spot marked and checked daily until it is ready to harvest.

Now back to my deflated souffle story. I could have fudged the photos to make them look perfect and risen. A little bit of top cutting off and shoving something in the black truffle and parmesan souffle to elevate it and puff it out. Trust me you would have never known their flatness if I didn’t want you to, and a good photo will hide all sorts of cooking faux pas. But sharing the truth really is more fun. Also fallen souffles prove that I am only human and things go wrong in the kitchen for every one.

The recipe was coming along swimmingly. I had made the most perfect roux and subsequent white sauce. My egg whites were stiff and shiny and my folding technique without fault. They were into the oven smelling and cooking away on the road to souffle bliss.

Knowing that souffles can fall pretty quickly once out of the oven, I had my set up ready for photographs. Souffles are fine if being served to the table straight away, generally they will get there still puffed up and pretty. But I was going to be fart arsing around with a camera to get those perfectly risen souffle shots so I had to be organised.

There was a rack to place the hot tray that would ferry my black truffle and parmesan souffles to where I was shooting. There were various pieces of cutlery, some plates, and strategically placed pieces of baguette.

JOSH!!!!!!!!! When panicking it is always best to just yell for your 23 year old son to come to the rescue.

I shut the oven door and we both head toward the bird. I am trying to reason with it, as you do. And all thoughts of the souffles leave my mind as the thought of the bird shitting all over our new white leather lounge enters it. This is when I internally start to panic, just a little.

The bird takes off from the rack and circles the room twice. I am waiting for what normally happens, that the bird will try and fly out the large glass windows at the back of the house. Which I may add are closed. But instead it goes back to the rack, looks down and attempts to pick up one of the slices of baguette.

Ahhh, light bulb moment, he wants the bread. I then realise he had probably been sitting in the bamboo next to the open door, planning his attack for some time while I was in the kitchen.

He gets half a metre in height off the rack with a piece of baguette, nearly the same size as he is, before he drops it. He sits back down, looks at the baguette piece that is now on the floor, starts eyeing off the other piece when I simple say to him “Really? Really?? You really think you are going to get that out of here??” To which the bird looks at me, looks back down at the piece of baguette, looks at me again, then calmly turns around and flies out the back door into the bamboo.

To which Josh says “That’ll teach you to leave the back door open when you are shooting”. To which I think, not say, "bloody smartarse kids", and we both go back to what we were doing.

Sadly when I get back to the oven, the souffles are slightly over cooked and fallen.

Even though what you see isn’t very pretty, I can vouch that they looked amazing when they were ready to come out that first time. They also smell and taste wonderful, either puffed up like peacocks or flat as pancakes.

Now that I have told you my baguette bird bandit soufflé story, I would love to hear if you have any tales of animal related kitchen disasters. Please share so we can all have a giggle along with you.

Belly Rumbles would like to thank Red Earth Truffles for the beautiful truffles that were used to make this recipe. 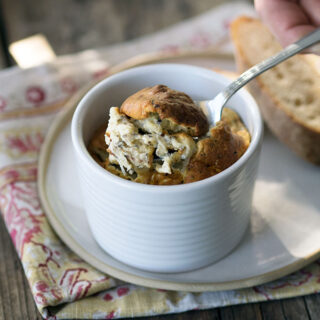 Did You Make This Recipe?I do a happy dance when people share how they went. Tag me on Instagram or Twitter @bellyrumbles & #bellyrumbles
« Flight Review: Cathay Pacific Business Class CX101, Hong Kong to Sydney
The Original Din Tai Fung Taipei, Taiwan »