Why is the mixture inhabiting within a mince pie called fruit mince? The ingredients that make up fruit mince don't include minced meat. The fruit itself is finely chopped, not put through a mincer. Why is it not called mixed spiced fruit or similar?

Our modern day fruit mince may not include meat, but traditionally it did. Mince pies, as we know them in Australia, are British in origins. They can be traced back to the 13th Century when European crusaders returned from the Holy Land and brought back with them middle Eastern cooking methods. Originally mince pies had a mixture of minced meat, suet, various dried fruits and spices. The use of mutton was common, but also veal, goose or even beef tongue.

In modern times the meat aspect of the pie has been dropped. You won't find any meat in my fruit mince, or other pies you can purchase around town.

Fruit mince is very easy to prepare and far surpasses what can be purchased at your local supermarket. I find the further in advance you prepare your fruit mince the better it tastes.

One year I made an excessive amount and was left with one jar unused. I had read somewhere that fruit mince could be kept in the fridge for a year. Words of wisdom from one of Australia cooking icons, Margaret Fulton, Maggie Beer or Stephanie Alexander. Whom it was, for the life of me I can't remember. I held over that jar of mince for another year and ended up using it the following Christmas. It ended up being unrivalled by my early fruit mince efforts.

You don't have to leave your fruit mince for 12 months. A week will be okay, a month will be better, but if you are really wanting a quality result, make if a couple of months in advance. It is worth nothing that even leaving the mince to rest and flavours develop for a week, will provide a satisfying result.

Quite apart from being very easy to make at home, there are other advantages. There is the joy of being able to use fruit that you like. I detest mixed peel, therefore it doesn't make its way into my fruit mince.

If going to the effort of making fruit mince from scratch, use the best ingredients you can afford. There is one ingredient that I do not skimp on, and that is the rum I use. Buy a good quality rum, I can't stress this enough. It will make all the difference and you can enjoy a glass straight up over the Christmas period. If you prefer, brandy can be substituted for the rum. Again, use good quality brandy, or better still cognac.

Later this week I will post a couple of quick and easy recipes you can whip up using your homemade fruit mince. In the meantime get your ingredients chopped up, combined, doused in good quality rum, and in the fridge for flavours to develop. 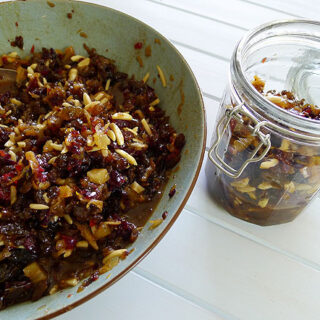