Making soda syrup at home is very easy and this cola syrup recipe gives you a natural cola flavour.  Perfect to stir into soda water or replace store bought coca cola syrup for Sodastream and other soda makers.

Why buy when you can make your own soft drink syrup at home?  This is a  preservative-free, colour free and additive-free recipe.

One of the fun things about purchasing a sparkling water maker or soda making machine is experimenting with your own homemade soda syrups.

This recipe was originally made for a Sodastream machine, though I now own an Aarke. Between you and me, I like the look of their bottles better.

But you don't need a machine to enjoy making soda syrups at home.  You can use them with sparkling mineral water or soda water too.

If you have invested in a soda making a machine, then you should have fun and make your own soda syrups.  Experiment with flavours.  I know that being able to make more adult tasting syrups really appeals to me.

Of course you need to start somewhere, and where better to start than a classic cola syrup recipe.

This cola syrup recipe is based on one I saw in The New York Times back in 2011. They had adapted the recipe from Brooklyn Farmacy & Soda Fountain located on Henry Street in Brooklyn. I haven’t actually visited their establishment but they have a solid reputation and a cookbook out on the market as well.

When you first taste this syrup don't think of this as a Coca Cola syrup or a Pepsi syrup.  It isn't going to taste like either of those two.  This has a far superior cola flavour with its own little uniqueness.

You may be quite surprised by the ingredients used in making cola syrup.  I know I was.  Do you pick up the flavours of citrus, fennel or ginger?

Special ingredients for this recipe

Most of the ingredients used are common, but you may not have come across tonka bean or cassia before.  Tonka beans are a wrinkly dried black bean with flavours of vanilla, clove and almond.  Cassia is similar to cinnamon but stronger and spicier.  Cinnamon can be substituted.

Special equipment for this recipe

You will need a piece of cheese cloth (muslin) to strain your cola syrup after simmering your aromatics.

The beauty of making your own soda and syrups is you can make them as sweet or as strong as you like. A tablespoon of flavouring mixed into a glass of soda water may be perfect for one person, another may like it sweeter with two or more tablespoons. I suggest you start with less and add more if needed.

How to Make Limoncello - the Italian way!
Fallout 4 Dirty Wastelander - the gamers cocktail
Should a Martini be Shaken or Sirred? - did 007 get it right?

PIN ME TO SAVE THE RECIPE 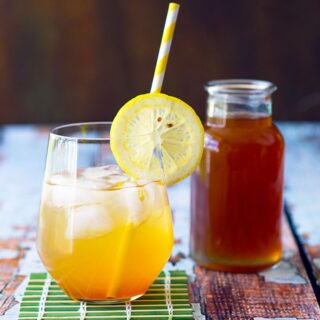 Most of the ingredients used are common, but you may not have come across tonka bean or cassia before.  Tonka beans are a wrinkly dried black bean with flavours of vanilla, clove and almond.  Cassia is similar to cinnamon but stronger and spicier.  Cinnamon can be substituted.