Hey everyone Josh here. That’s right I’m making a comeback (I think this may be comeback #3), and this time I swear I’ll be sticking around. To ease you in to my return I’m starting off with a Fallout 4 Dirty Wastelander Cocktail.

Those not in the know, I’m a HUGE gamer and nerd. So here’s the deal, I’m going to be posting gaming or pop culture related food and drink recipes at least once a month.

As you may have guessed being called Fallout, the game is set post nuclear blast. It’s all about surviving in that hostile environment.

So how do you survive the apocalypse in Fallout 4 in style? You make a Fallout 4 Dirty Wastelander Cocktail!

Now to be fair I can’t make a true Fallout 4 Dirty Wastelander Cocktail due to that fact that the ingredients in the Fallout universe don’t exist. Nuka Cola is the post apocalyptic equivalent to popular cola you are all well aware of, therefore is very easy to replace.

Another key ingredient is Mutfruit, which are a mutated berry from the game, they look a little like a modern day blackberry, so lets substitute Mutfruit with blackberries. What we do have and don’t need to replace is easy to obtain whisky.

If a Fallout 4 Dirty Wastelander Cocktail isn’t your speed, then how about something a little more refined for the modern day? The Clean Wastelander, for those that aren’t cola or whisky fans.

My personal favourite is the Fallout 4 Dirty Wastelander Cocktail, which I wasn’t expecting, but it turns out to be a way too easy, very tasty cocktail to drink.

So there you have it two game inspired drinks from my favourite post apocalyptic world. Tune in next time for another inspired recipe from the nerdy, geeky or another realm I love. 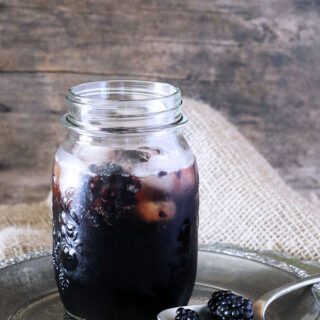 GENERAL COOK’S NOTES All oven temperatures are fan-forced, increase the temperature by 20 Deg C (70 Deg F) for convection ovens. All measurements are Australian tablespoons and cups. All measures are level, and cups are lightly packed unless specified. Herbs are fresh | Vegetables are of a medium size | Eggs are roughly 60 grams in weight (large)   NUTRITIONAL INFORMATION BELOW IS A GUIDE ONLY - For Dirty Wastelander