One of my favourite aspects of travelling is trying beautiful produce and meeting the talented and passionate creators responsible. Such an adventure is why I’m sharing this simple, tasty, grilled halloumi with honey and rosemary recipe with you.

The halloumi used in this recipe is produced on a farm situated in the hinterland of the mid North Coast of NSW. The 130 acre property, not far from Port Macquarie, is aptly named Ewetopia!

Ewetopia cheese production may be small scale but they are producing some award winning cheeses and milk. They have around 23 ewes that are milked daily over the summer months. The milk is made into feta, haloumi, labne and yoghurt.

Their haloumi has won Gold at the Sydney Royal Cheese and Dairy Produce Show. Quite a prestigious award to win as the competition is strong. Ewetopia has also taken out Silver for their jersey milk.

Above you can see the milking stalls. The ewes walk up a little ramp and munch on some goodies while Ian milks them. In the shed is the cutest milking stool, which is used for show on open days.

There is a sterile room adjacent to the milking shed, this is where Ian produces all the delicious cheese. The whole area would probably be the same size as a three car garage. Small but suits the scale of their current production brilliantly.

Want to experience a little more of farm life? Ewetopia offer farm stay accommodation via a purpose built three bedroom cottage that sleeps six people. The cottage has a decent size kitchen if you like to cook and a spacious wrap around veranda. Where you can to relax and enjoy the view over the farm and the rolling hills of Ellenborough.

During your stay you can search for freshly laid eggs from the free range chooks. Watch the sheep and cows being milked or peer through the window into the cheese room and watch Ian at work.

There is also a salt water pool and barbeque area for your enjoyment. Basically everything you need for a relaxing farm escape.

I did fall in love with the jersey cows, especially “brown cow” above. Who seemed to stalk me during our visit to Ewetopia. I couldn’t help but snap Brown Cow peering in and watching me while we had a look at the milking shed. A black bull decided that Josh was his new best mate and wanted scratches and attention. When Josh stopped he found himself being head butted in the thigh to continue.

Ewetopia do have farm gate cheese sales, but only via prior arrangement. Give them a call on 6587 4281 or 0409 941 656 to arrange a visit. Alternatively you can find Ian and Jill at the following farmer’s markets.

We based ourselves in Comboyne whilst visiting the Port Macquarie hinterland. Comboyne is a little off the beaten track and not really a tourist destination. Saying that, it’s well worth the visit and makes a great base to stay.

Comboyne is a small and quaint village, which developed due to the area’s timber and dairy industry. These days the dairy industry is on the decline and farming of cattle is on the rise. Amongst the rolling hills of the area, avocado, kiwifruit, macadamias, blueberries and potatoes are also farmed.

As you can see from the above the locals love their cows!

The quiet streets are lined with flowers and the local residences are all small town picture perfect. Even one of the Koalas from Port Macquarie’s Koala Sculpture Trail has made its home in Comboyne. Suitably decorated as a cow of course.

There really isn’t that much to the town itself. The local service station is also the supermarket, surprisingly large and well stocked. On the side of the service station is the Comboyne Mural and Mosaic created by artist Tertius.

While town has the basics, a short distance from town will have you discovering stunning nature. Not far from Comboyne you will find the Ellenborough Falls. These falls are the longest single drop falls in the Southern Hemisphere.

Boorganna Nature Reserve is also not that far. Boorganna is the second oldest nature reserve in NSW. A visit will give you a taste of what Comboyne Plateau was like before forest clearing by cedar cutters and dairy farmers.

We stopped in to the Bowerbird for coffee and breakfast on our last morning in the area. A small and welcoming café, which has been decked out with eclectic bits and pieces the owner has come across. There are also items for sale from local artists and creators.

They do a decent coffee and as you can see, also make a ripper looking pie. The small menu changes daily and we had satisfying croque monsieur for breakfast.

Comboyne Accommodation – The Round House

There are a few self contained accommodation options around Comboyne. We decided to stay at The Round House (also known as Comboyne Hideaway or The Yurt). Comboyne village is about a 10 minute drive away.

The house is surrounded by trees and is very private. There is a spacious balcony, which is home to a large spa, barbeque and an outdoor table and chairs. Whilst relaxing in the spa you can take in the extensive views that go all the way to the Pacific Ocean.

An open plan house with two bedrooms (both with queen beds), which comfortably sleeps four and one large bathroom (no bath). A good accommodation option for two couples. It has a small but adequate kitchen with everything you need for your stay. There is even a coffee maker with fresh beans ready to go.

Actually I would say the kitchen provided more than we needed for our stay. I do see what our hosts were trying to achieve, by providing dried herbs and other shelf stable items. There were even some packets of instant noodles, some tins of tomatoes, box of pasta etc. It was a homely touch providing pantry staples.

But I think that is where they needed to draw the line. What I wasn’t keen on were the half used bottles of sauces, salad dressings etc in the fridge. As well as a half eaten tub of ice cream, open packet of peas, and mystery tub of white frozen stuff in the freeze.

Working with food for a living I am probably more peculiar than most, and more aware of food safety standards. Having no idea how long the items had been open for, who put them there, were they just leftovers from the people before, and what was the pervious users hygiene like?

Was the ice cream left over from those who stayed before? Was their ice cream eating habit one of straight from tub to mouth and repeat? There was no way I was using any of it.

As mentioned the view is extensive. Not being a morning person I did find myself getting up to enjoy sunrise. How stunning!

Ian gave me a couple of tubs of Ewetopia’s halloumi to bring back to Sydney and have a play with. While Josh and I were there he fried up a couple of pieces for us to try, and I have to say it is the best halloumi I have eaten in a long while. It’s creamy and delicate, not overly salty and even though soft still has that “squeak to tooth” when you bite into it. I can see why they won gold.

I really didn’t want to do too much to the cheese and detract from the beautiful product that it is. So I did what all good bloggers do, I stole the idea from Drury Lane Eatery in Port Macquarie. Bingo, grilled halloumi with honey and rosemary was born.

We visited Drury Lane Eatery for a delicious Harvest Lunch, which was held as part of Tastings on Hastings. I will be sharing the splendour of this lunch over the next couple of weeks.

Chef Drury Woolnough had Ewetopia’s halloumi on the menu. His version of grilled halloumi with honey and rosemary was sensational, and I am sure Drury was more cheffy about his dish than I am about mine.

It was simply baked or grilled in a small cast iron skillet with the main flavours coming through being rosemary and honey. The dish won me over and all I wanted to do was recreate his grilled halloumi with honey and rosemary. At least as best I could with my stash of Ewetopia halloumi.

Warning this really isn’t a recipe, more like guidance, as it is so simple. 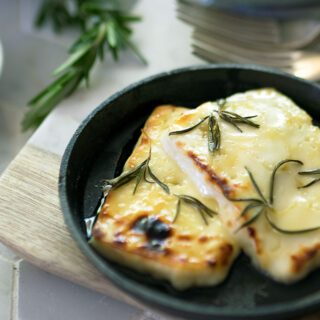 Grilled Halloumi with Honey and Rosemary

Calories: 236kcalCarbohydrates: 1gProtein: 17gFat: 18gSaturated Fat: 13gSodium: 900mgSugar: 1gCalcium: 750mg
Keyword how to bake halloumi, how to cook halloumi, what cheese goes well with honey
Did You Make This Recipe?I do a happy dance when people share how they went. Tag me on Instagram or Twitter @bellyrumbles & #bellyrumbles

Really doesn’t get any simpler than that. Grilled halloumi with honey and rosemary is the perfect summer or spring dish. Served along side a crisp green salad and you really can’t go wrong.