Well hello there! I've been quiet, I know. Belly Rumbles has resembled a ghost town over the past two weeks. Apologies for that guys, but there has been quite a bit going on.

A family vacation to the Northern Territory, Kakadu, Nitmiluk, Litchfield and Darwin, conquered and explored. Stay tuned, there will be lots of sharing in regard to our adventures.

I have been a busy bee along with Amanda of Chew Town working on The Sweet Swap. It will be officially launched this Wednesday, but please pop over to The Sweet Swap for a sneaky peek. Be the first to see what it is all about before we officially announce the Aussie Food Blogger event to the World.

Then there is my sweet Sally. Sal has been back at the veterinary clinic for more surgery to remove, not one, not two but four tumours. As Josh put it, she looks like she is cos playing as Tim Burton's Frankenweenie. Three large nasty incisions, one on either side of her torso and the other down behind her front leg. Still waiting on results, and fingers are crossed they got them all.

If you have been reading Belly Rumbles for a while, you will know that over the past three years Sally has been under the knife a few times, in fact six, to remove cancerous tumours. Hopefully this is the last time.

Yes, that dirty evil disease, CANCER. Sally may have four legs and fur, but she is part of our family. Loved immensely, and there really isn't anything I wouldn't do for her. My family is no stranger to Cancer. A couple of years ago my beautiful mother-in-law lost her battle. I have lost my grandmother to bowel cancer and an aunt also lost her own battle with the big C. There have been friends, friends' children, acquaintances, all having their lives cut short to this disease.

Cancer Council Australia's Biggest Morning Tea is being held on 23rd May. If you are busy that day, don't worry you can put on an event any time during May. You can host a morning tea almost anywhere, your house, at work, a favourite cafe or restaurant, even a picnic in the park. The possibilities are endless.

To register head over to the official website www.biggestmorningtea.com.au or call 1300 656585

After reading all that you are still probably wanting to know, what on earth is a KiwiBerry? KiwiBerries are miniature hairless kiwi fruit. They are basically Kiwi fruit that can be eaten in one mouthful, and cute to boot.

I did make these doughnuts before I had any thoughts on recipes for Australia's Biggest Morning Tea, but I think they would be just perfect. 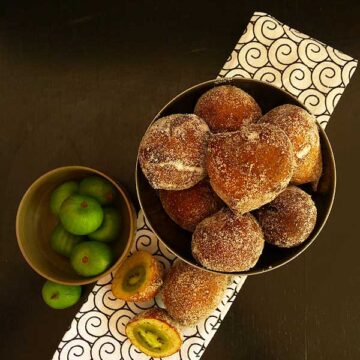 Serving: 1gramsCalories: 48kcalCarbohydrates: 8gProtein: 1gCholesterol: 20mgSodium: 9mgSugar: 2g
Did You Make This Recipe?I do a happy dance when people share how they went. Tag me on Instagram or Twitter @bellyrumbles & #bellyrumbles

These doughnuts are great by themselves, but a dipping sauce would work brilliantly with them. Maybe a chocolate or a honey inspired dipping sauce?

I first stumbled across KiwiBerries on He Needs Food back in the beginning of 2011. The recipe was for KiwiBerries with Shirkhand. I fell in love with these mini grape sized kiwi fruit looking berries. I wanted to get my hands on a punnet and play with them. Fast forward to March this year and bingo, I find them. There they were sitting on the shelf of my local grocery store. After not seeing them for two years I quickly grabbed a couple of punnets, and these doughnuts were born!

Do tell dear Belly Rumbles' reader. Does it take you as long as me, from the time you lust after an ingredient to when you finally get your hands on it to play with?