I’ll be honest with you, I have never called ice blocks popsicles in my whole life.  Well, that was until around six months ago, damn those Americanism influences.  Why do Americans and Canadians call them popsicles?  The same reason why some Australians call tissues a Kleenex, Popsicle was a popular early ice block brand in their region.

No matter what you call them, popsicles, ice blocks, freezer pops or even ice lolly as they do in the UK, you are probably a little bit over seeing recipes for frozen treats on a stick.  The internet has gone a little crazy with ice block recipes of late.  Being summer here in Australia, it seems nearly every blogger has a recipe on their site.

This will make two on Belly Rumbles and the last one for this season.  The recipe I’m sharing with you is a very special one.

These ice blocks remind me of long summer days down the South Coast of NSW.  Long hot days where the mornings were occupied with swimming in the local river, trying to avoid jelly blubbers (jellyfish) that bobbed around us.  Later in the morning it was usually a trip to the beach, or we would take the boat out on the river and basin.  After lunch my parents would have their ritualistic holiday nap and I would play cards with the boys before hitting the river again later that afternoon.

The boys?  Yes the ragamuffin bunch I spent my Christmas holidays with (and other holidays) growing up.  I was the only girl in the street.  Our family holiday house was in a tiny one street suburb that hugged the local river.  The boys would be sent to their grandparents for the holidays.  There were the brothers JH and GH and AFL boy from Melbourne.  He was my first introduction to those stupidly tight AFL shorts. I grew up with these guys, we were a tight group and best buds.  We seemed to know each other from day dot.  Sadly we have all lost contact over the years.

These ice blocks are in memory of AFL boy’s grandmother Rose.

I best remember Rose for her gentle manner and artistic flare.  During peach season she worked at the local peach orchard.  The orchard is still there and hopefully I will get to pay it a visit again one day soon.

My summer days were filled with peaches.  Rose would make peach ice cubes for us to munch on while we played cards.  Not ice blocks or popsicles, plain old ice cubes, which would be piled into hi-ball glass.  We would sip, slurp, crunch and munch our way through countless games of gin rummy and euchre.  When bored with cards we would move on to monopoly or scrabble.  PlayStation and Xbox didn’t exist in our world.  One Christmas I received the most exciting Atari’s PONG which we played on the antiquated holiday house TV, it only kept our interest for around an hour before we headed outside to jump in the river again.  For those of you born after the 70’s you will have no idea of how exciting two sticks and a ball bouncing around on your black and white TV could be.

Rose’s ice cubes were very simple, poached peaches frozen in their poaching liquid.  The peaches were glorious, not like the taste lacking ones we get in Sydney’s major supermarkets.  Only a sprinkle of sugar was added to the poaching liquid, a slight flavor enhancer.  The cubes were basically pure peach, I loved them.

I have made one slight alteration to Rose’s ice cubes.  I have added a few food grade dried rose petals in her honour. 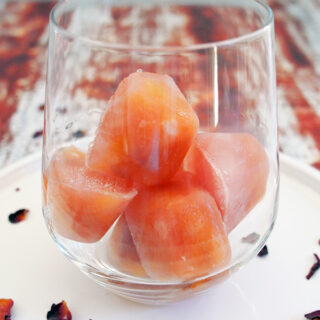