Vegemite on toast would have to be one of the most popular breakfast dishes eaten by Australians. Diehard fans won’t even leave the country without a trusty jar of the black smelly stuff.

This Australia Day, why not take humble Vegemite and toast up a notch with my recipe for Vegemite ice cream, French toast and honey bacon for breakfast?

Australians generally fall into two camps over this thick yeasty spread. We either love it or hate it. I was part of the ‘hate it with all that I have’ camp for many years. Believe it or not I have QANTAS to thank for my liking of Vegemite.

Before the QANTAS Club in Sydney upgraded their breakfast options, by offering pancake makers and sandwich presses to customers, it was pretty slim pickings for morning flyers. You had a choice of toast with jam or vegemite, as well as fruit and cereal. I’m a girl who craves savoury over sweet, and would have given my right arm for a miserable slice of cheese to put on my toast. But sadly it wasn’t to be. Instead I would grab some toast, slather it with lots of butter, and then scrape the teeniest amount of Vegemite on top for a savoury breakfast fix.

Now I can imagine that most of you reading this are again falling into two camps over this ice cream. Camp one “OMG Sara is brilliant” and camp two exclaiming, “She’s nuts, how disgusting, blerff”.

Let me assure you that this ice cream is brilliant. It smells like Vegemite, but taste wise it hints at it. On tasting there is a sweet and savoury dance being performed on your taste buds. Place it on thick slices of eggy French toast with a side order of honey candied bacon, and you have a wonderful collection of tastes that marry extremely well together. The holy trinity of salty, sweet and savoury.

Both Josh and Mac fall into the “I hate Vegemite with a vengeance, where’s Bruce Willis to sort this situation out” group. After force feeding them both the ice cream they were surprised to find out that they both really enjoyed it. If you follow me on instagram you may have seen Sally happily scoffing a bowl of it as well after the photo shoot. 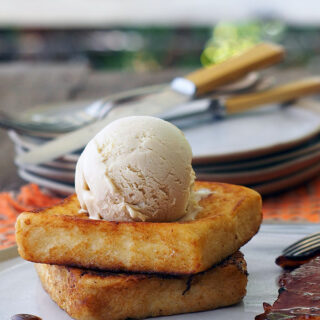 Calories: 261kcalCarbohydrates: 20gProtein: 5gFat: 17gSaturated Fat: 10gCholesterol: 168mgSodium: 104mgPotassium: 98mgSugar: 17gVitamin A: 670IUVitamin C: 0.2mgCalcium: 84mgIron: 0.5mg
Did You Make This Recipe?I do a happy dance when people share how they went. Tag me on Instagram or Twitter @bellyrumbles & #bellyrumbles

Of course you could make maple bacon to go with this dish. As maple Syrup is a Northern American staple, I wanted to use true blue Aussie honey instead.

If you are a Vegemite fan, you will enjoy the ice cream as it is, scooped into a bowl or cone. Not so much a fan? Make a batch up in any case for the fun factor, but definitely eat it with the toast and bacon, you will be amazed how well they all go together.

What would be the strangest flavour ice cream you have tried?