These chicken liver cookie dog treats will have your doggo smacking their lips.  Only five ingredients and far better for your dog than store bought.

Saturday I spent a good part of the day waiting for the phone to ring. Isn't it terrible, that anticipation, just waiting, wishing, wanting and willing for a phone to ring.  My waiting was for the Super Surgeon, to call me to announce that everything was okay and I could come and pick Sally up after another week of being away from home at the veterinary clinic. Sally is my dog, just in case you aren't in the loop.

For those of you that aren't in the loop, Sally has undergone some pretty major surgery to remove three cancerous tumours over the past few weeks.  Two on her body and one on her front leg.  It was the one on the front leg that had caused us the biggest concern, there was even talk of possible amputation at one stage due to the size of the tumour.  Thank goodness we were able to avoid that.

Without going in to too much graphic detail, the operation ended up with Sally having to have a skin graft that has covered a major portion of her front leg.  This whole procedure was a risk which held a 30% fail rate.  All this added up to Sally being away from home for nearly three weeks, except one weekend in between the two surgeries where she had a couple of nights back home.

That brings me right back to last Saturday.  What does one do when they are waiting anxiously for the phone to ring?   Waiting for a voice on the other end to say it's okay to come and pick up a much loved member of your family........

Well, I thought that would have been obvious, you bake chicken liver cookies of course!

This recipe is based on one I found in a cookbook called Okashi, sweet treats made with love, written by Keiko Ishida.  A beautiful Japanese/French pastry cookbook.  You may think it strange to find recipes for pets in such a book, but Keiko is an animal lover with a gorgeous golden retriever called Cookie.  She has dedicated a small section to treats for your favourite four legged family member.

The recipe is really easy and simple to whip up.  I did make a slight change by substituting semolina for cornmeal, basically I could not get my hands on any.  I also didn't use soybean milk but instead low fat cows' milk as that is what I had on hand.

My cookies didn't go as crisp as Keiko's seemed to.  Maybe this was due to the substitution of semolina for cornmeal?  The biscuits end up having a very soft pate taste to them and aren't overpowering in liver smell.

Sally is well and truly home now with us both visiting the surgery every second day at the moment for bandage changes.  So far all has gone well and fingers crossed it continues to do so, but we are still in early days.

Now for the most important bit, and that of course is what Sally thought of the chicken liver cookies.  She loves them! 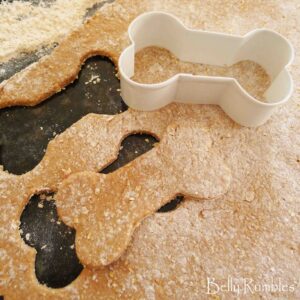 Calories: 35kcalCarbohydrates: 5gProtein: 2gCholesterol: 28mgSodium: 8mgPotassium: 30mgVitamin A: 750IUVitamin C: 1.2mgCalcium: 5mgIron: 0.9mg
Did You Make This Recipe?I do a happy dance when people share how they went. Tag me on Instagram or Twitter @bellyrumbles & #bellyrumbles

I want to take this opportunity to say a big thank you to Ben Landon, aka Super Surgeon, the other vets (Sonja & Chris), as well as the interns at Sydney University Veterinary Clinic that were Sally's medical team over the past few weeks.  We could not have asked for a friendlier, more experienced and caring group of people to have looked after her.  She became a favourite at the clinic and is very comfortable and quite excited to see the team when we go back for our regular visits.  Now that says something about that group of people when our girl has been through quite a bit.