You may remember earlier this year I shared my recipe, Macadamia Nut Tarts with Golden Syrup Ice Cream. This recipe was developed especially to announce that CSR were asking Australians to submit a family recipe that was dear to them to be included in the Made for Memories Cookbook.

I’m happy to announce that recipes were chosen from all over Australia, triple tested, and photographed. The result is over 100 pages of amazing recipes that will make your mouth water. Recipes made from the heart using one of the many CSR products on the market.

I was thrilled to see that my Macadamia Nut Tarts and Golden Syrup Ice Cream received a two page spread. It’s always such a lovely warm and fuzzy feeling seeing your recipe in hard print. I decided to use some of my favourite CSR products in the recipe, ones that add a lovely depth of flavour to a dish; raw caster sugar, brown sugar, Demerara sugar and golden syrup.

CSR’s Made for Memories Cookbook was pulled together to celebrate 160 years of being the sugar of choice in many Australian homes. What I love about the cookbook is that the collection of recipes reflects the diverse cultural heritage that Australia has been built on.

Dotted in between, what I regard as typical Aussie Anglo Saxon recipes similar to what my maternal grandmother would have made, are recipes that celebrate Australia’s rich cultural history of the past 50 plus years. Recipes introduced to our culture as families from other countries came to our shores and called Australia home. Just like my great grandmother did when she bundled up my grandmother, great aunt and all the children to escape war torn Latvia during WWII, to call the safer shores of Australia home.

You will find recipes that we today regard as normal Aussie fare like; Yiayia Stella’s Baklava, Mina’s Kourambiethes, Ciupe’s Lithuanian Krustai, Kathryn’s Churros with Chocolate Sauce, and Viola’s Kanafeh.

Head to your local Woolworths Supermarket between the 14th and 20th October to get your copy of Made for Memories.

Growing up next to an Italian family I decided to make Nonna Geatana’s Pinci Pinci Almond Biscotti. The recipe was submitted by Pina from Strathmore in Victoria. I feel it’s best to quote how Pina feels about this recipe;

“When I make these biscuits, the beautiful almond and lemon aroma fills my kitchen and takes me back to the many festivities our family celebrated and the times spent baking these biscuits before Christmas, Easter and birthdays. They are called Nonna Geatana’s Pinci Pinci Almond Biscotti as it was my mother who taught me how to make them and the shape they resemble”.

My almond biscotti didn’t quite turn out as pretty as the photo in the Made for Memories cookbook, but by golly they filled the house with beautiful aromas while cooking. They also tasted amazing with a brilliant texture to them. They are crunchy on the outside, but when you bite in you are met with an explosion of moist almond biscuit. I must warn you that this recipe does make a lot of biscuits. The recipe states approximately 45, I made slightly more than that. Therefore I shipped a quantity of them off with Mac to work. The biscuits keep very well, it is a week after I baked them and there are still some left. Those that are left are still crunchy on the outside and moist on the inside. 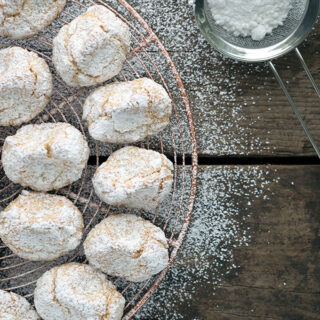 Would you like to get your hands on a copy of CSR’s Made for Memories Cookbook? It is really easy to do. Just head to your local Woolworths Supermarket between the 14th and 20th October, purchase any three 1kg CSR products and the cookbook will be yours as an added bonus.

What I love about this is that sugar keeps very well in the pantry, is a non perishable staple, and most of us use it to make those feel good occasional sweet treats. So 3 x 1kg products may seem a lot, but with Christmas around the corner you will probably get through those products quick smart.

If you do end up making this almond biscotti recipe and you share your end result on social media, please let me know by using the hashtag #bellyrumbles. Of course if you make anything from CSR’s Made for Memories let them know using #madeformemories and #bakingnation.

It really is a lovely cookbook that CSR has put together. It is filled with gorgeous glossy photos (one for each recipe) and recipes which are dear to the heart of every contributor. It is definitely one that you will want to add to your cookbook collection. A true collection of sweet recipes to remember.