These black sesame doughnuts taste wonderful but it's the caramel miso glaze that makes them shine. A bit like the Nutella cream in the hazelnut sponge I posted a little while ago, I couldn’t seem to keep my fingers out of the bowl, once glazing had finished, to scoop up the remaining drips and dribbles.

I use black sesame paste in these black sesame doughnuts, also known as Nuri Goma in Japanese. You will be able to find it in Japanese or Asian grocery stores. It is one of those staple items I keep in my fridge. I use it in baking quite a bit, but it is just as nice spread on toast or fresh bread.

If you can’t find Nuri Goma or are slightly turned off this recipe by having to purchase a special item, don’t be. You can easily make Nuri Goma at home. Roast ½ cup of black sesame seeds, then blitz in a mini processor with 4 tablespoons of honey. This will yield you around 6 tablespoons of Nuri Goma and just enough for this recipe. Now how easy was that!

Actually why I buy it I’m not quite sure, it really is simple to make. Oh hang on, I forgot, I’m lazy!

I also fried up the doughnut holes and the scrappy pieces of left over dough. The scrappy pieces were eaten non iced and as soon as they were cool enough to handle. I decided to dunk the black sesame doughnut holes also in the glaze, but Josh came up with a great idea after I had dunked the lot. Why not toss them in some matcha sugar? This would have been not as messy and quite tasty. Actually that almost sounds like another recipe post doesn’t it! 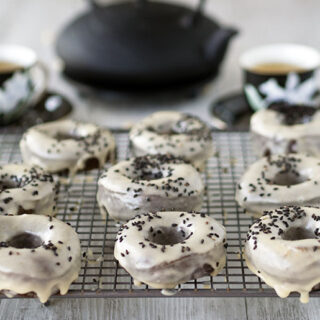 GENERAL COOK’S NOTES All oven temperatures are fan-forced, increase the temperature by 20 Deg C (70 Deg F) for convection ovens. All measurements are Australian tablespoons and cups. All measures are level, and cups are lightly packed unless specified. Herbs are fresh | Vegetables are of a medium size | Eggs are roughly 60 grams in weight (large)   NUTRITIONAL INFORMATION BELOW IS A GUIDE ONLY