There are two things I love about winter, soup and fireplaces, but not in that particular order.

As much as I have fallen head over heals for this clam chowder recipe, nothing can replace the lust in my heart for my fireplace.

Once winter hits, the fire is on every evening. It is a big open fireplace and one of my major loves of our house. In fact during winter it turns me into a creature of the night, as I just don’t want to leave its side to go to bed.

Between that and Netflix, I am surprised that I sleep at all.

I am usually a very lazy soup maker. I make up a big pot of chicken stock (16L), which is then frozen in various quantities. This stock then becomes the base of many after work, easy to prepare soups.

There is nothing difficult about this clam chowder, it is just a little more time consuming than most of the other soups I make.

I should embellish on this. Normally my soup making entails softening some leek or onion in a pot with butter. Throwing in some chopped up potatoes (or other veg) and covering with my premade chicken stock. Once the vegies are cooked I then puree the lot with a stick blender, season, and then, soup's done!

Actually when I rethink the difficulty level and time factor of this chowder, it isn’t difficult or too time consuming. Practically as easy as my normal soup methods. Just replace the pureeing time with the time it takes to steam the clams.

The taste? The speck adds a wonderful smoky richness to the clam chowder. It marries so well with the fresh “sea” flavours of the clam stock. Even though cream is added to this soup, it isn’t as heavy as some chowders I have eaten. It really is a lovely balance of flavours and textures.

Yes, any clam chowder leftovers will freeze. I ended up freezing a portion which I’m chowing down on as I type. It reheats perfectly; the potatoes do not turn to mush, which was a concern of mine. Just defrost and heat up in a pot.

As I can get very stuck in a soup rut, with my quickie after work wonders, would love to hear what your favourite soup flavours are. Any weird and whacky ones you enjoy, maybe flavour combos I should try? 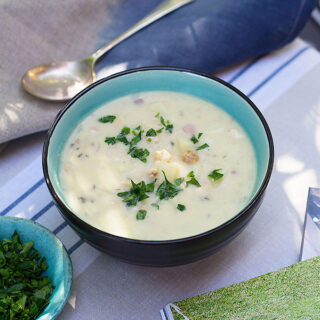 Recipe Author: Sara McCleary
The speck adds a wonderful smoky richness to the clam chowder. It marries so well with the fresh “sea” flavours of the clam stock. Even though cream is added to this soup, it isn’t as heavy as some chowders I have eaten. It really is a lovely balance of flavours and textures.
Print Recipe Pin Recipe
Prep Time 25 mins
Cook Time 25 mins
Total Time 50 mins
Servings 4

Did You Make This Recipe?I do a happy dance when people share how they went. Tag me on Instagram or Twitter @bellyrumbles & #bellyrumbles
« Taiwanese Scallion Pancakes
Raohe Night Markets Taipei Taiwan »