Normally I am the eater, and never in a million years did I envisage being on the menu. Belly Rumbles is a culinary adventure, no matter what end of the “fork” you are on. At Dr Fish in Jiaoxi just outside of Taipei you get the chance to be a culinary delight to thousands of teeny tiny (and some not so teeny) fish.

Dr Fish is a foot spa, where millions of little teeth give you a foot massage/pedicure. Sounds fun doesn’t it? Having piranha thoughts yet?

No need for piranha thoughts, which did cross my mind before thrusting my feet into one of the pools at Dr Fish. The fish used for these fishy pedicures are called garra rufa and are toothless. 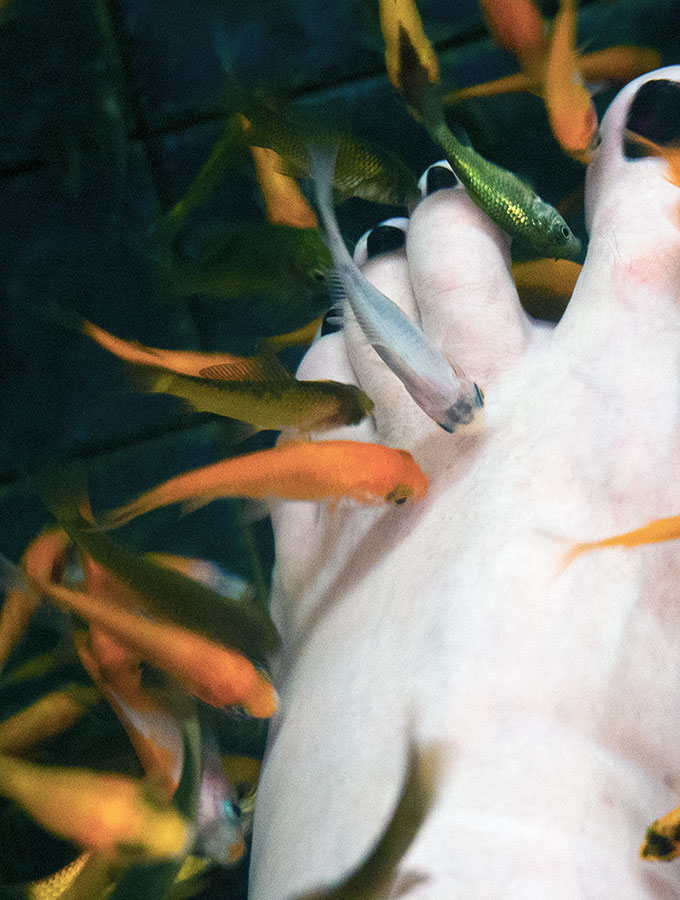 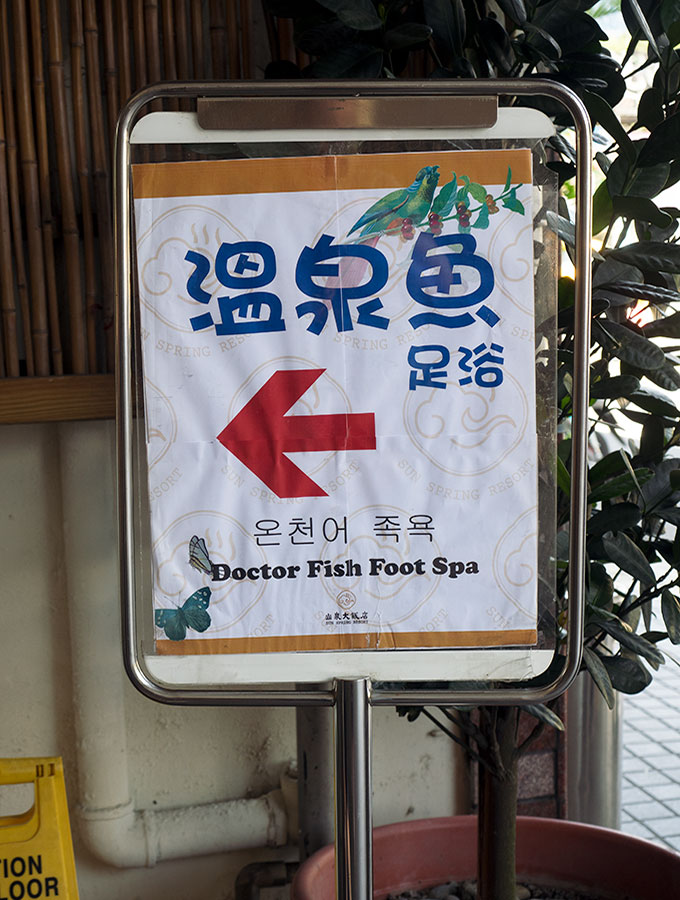 I hadn’t had many thoughts about the little side note on my itinerary called Dr Fish before we got there. We had just finished breakfast of roadside shallot pancakes when we were escorted to the “spa”, and faced with two large pools filled with tiny fish. Yes I did hesitate a little, but then my “when in Rome” traveling attitude kicked in. Subsequently in went my feet to act as a mid morning snack.

Pedicure via fish wasn’t a new concept to me at the time. They are quite popular around Asia. Though Dr Fish at Jiaoxi was an establishment on a far larger scale than I had encountered before. In the past I have seen tubs, not much bigger than a home aquarium filled with fish into which clients submerge their feet to be gummed. This has never appealed to me and I often thought of the possible associated hygiene issues.

As the pools were so large at Dr Fish I didn’t even think of the thousands of feet that these little guys had probably munched on before mine. Plus I will admit I was caught up in the moment of a new experience. It was only after returning back home that I did a little research on garra rufa or, as they are commonly known, Dr Fish. 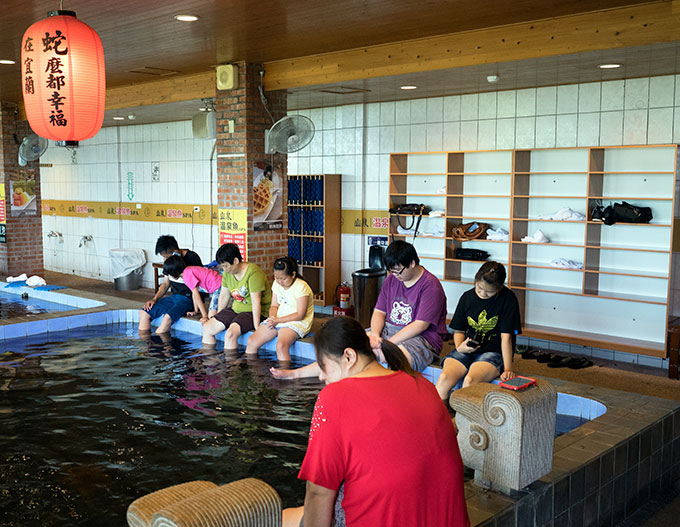 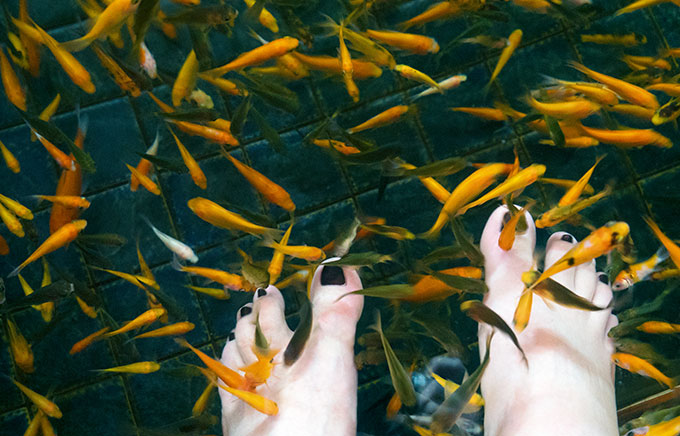 What are garra rufa aka Dr Fish?

My Dr Fish sightings and sole experience have been in South East Asia and Japan. What I didn’t know is that these little fish originally come from areas such as Turkey, Iran, Iraq and Syria. Commonly found in rivers, streams ponds and lakes in the Middle East.

Garra rufa are known as Dr Fish, but they can also go by the nicknames nibble fish, kangal fish and bonefish. 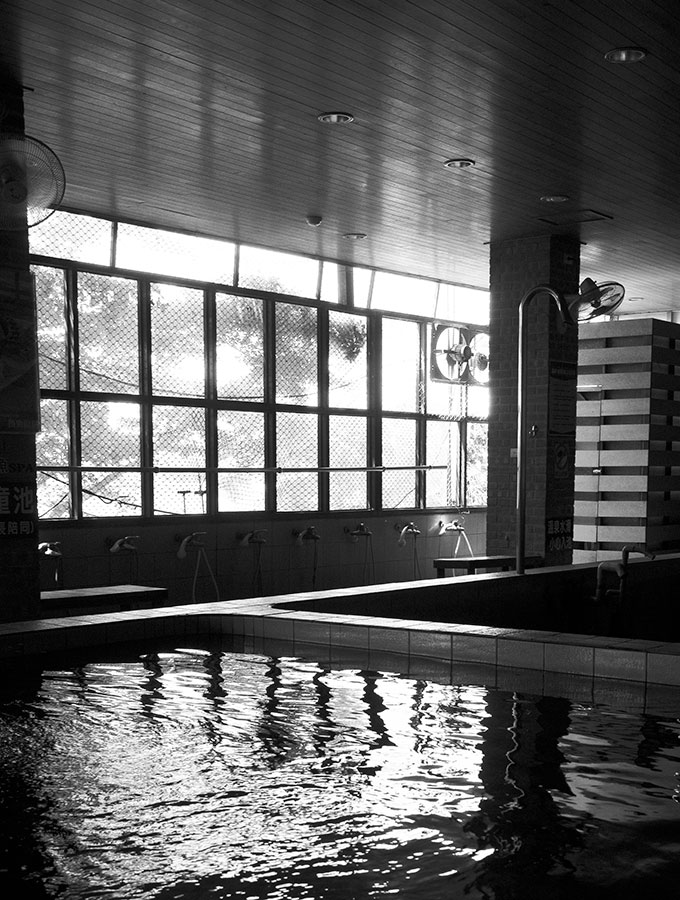 It’s a very simple procedure and anybody that can bend at the waist is able to take part. There are many different setups around the world, but the one at Jiaoxi slightly reminds me of a Japanese onsen.
Shoes are removed and stored in a pigeonhole with your other belongings close to where you have the fishy pedi. Once shoes are removed it is time to wash your feet via one of the numerous hand showers along the wall. These are very much like what you would find in a Japanese onsen, but without the stools to sit on.

Once feet are washed you head to sit on the edge of one of two fish filled swimming pools. Place your feet in the water, there is a step running the length to rest on if you wish, and then wait for the fish to come to you.

Come they will, they will swarm to your feet and start gumming and sucking away. How long your feet stay as a source of nourishment for the fish depends on the amount of time you have purchased. I probably lasted about 10-15 minutes before the novelty wore off. 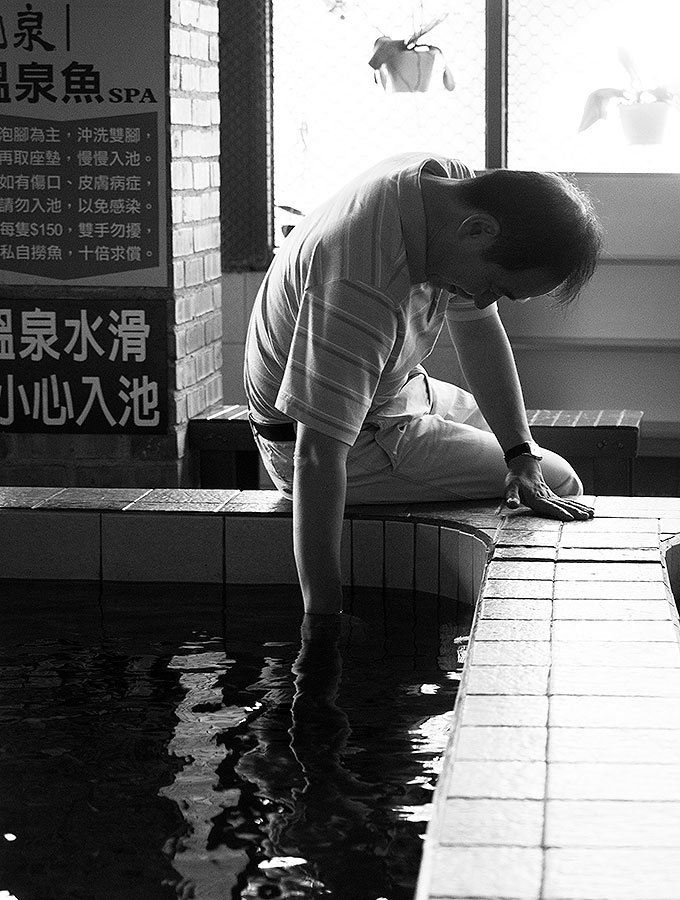 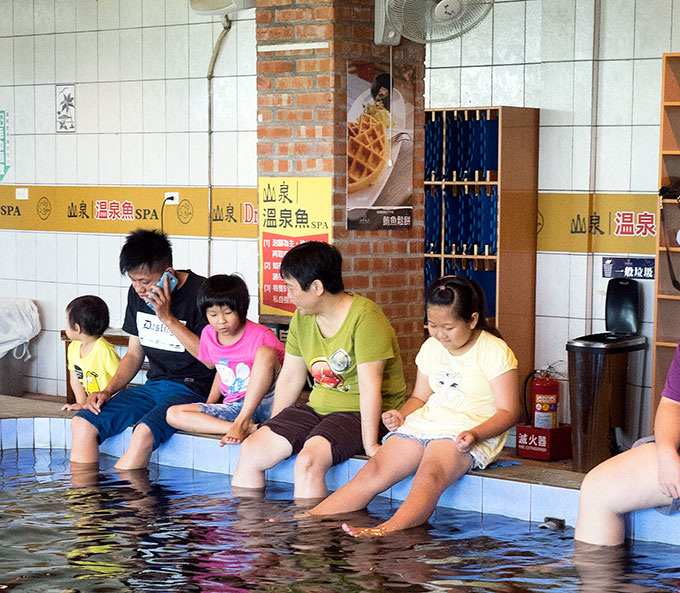 You don’t really feel much at all, sometimes they can be a little ticklish. The fish are rather gentle, and any sudden movements will make them skittish. Personally for me it was a bit of a mind game, solely the fact my feet were morning tea. I didn’t feel any pain or discomfort.

What are the health benefits of a Dr Fish pedicure?

As this was an organised stop on a media famil, unlike my usual trip planning and research, all research on Dr Fish was carried out post experience. Therefore I can share with you my research to help you make up your own mind. I’m no expert on dead skin eating fish.

There are lots of health benefit claims, none of them scientifically proven. A Dr Fish pedi has been touted to reduce foot odour, aid athlete’s foot, improve blood circulation, relax the body, provide relief for people suffering from eczema and psoriasis, and of course to remove dead skin from your feet.

After having a Dr fish pedi, the only claim I can attest to is that it removes dead skin from your feet. Not that I had any ailments that needed curing. What I can confirm is that you will get a far better dead skin removal result from your beautician. Plus fish can’t paint your toenails. 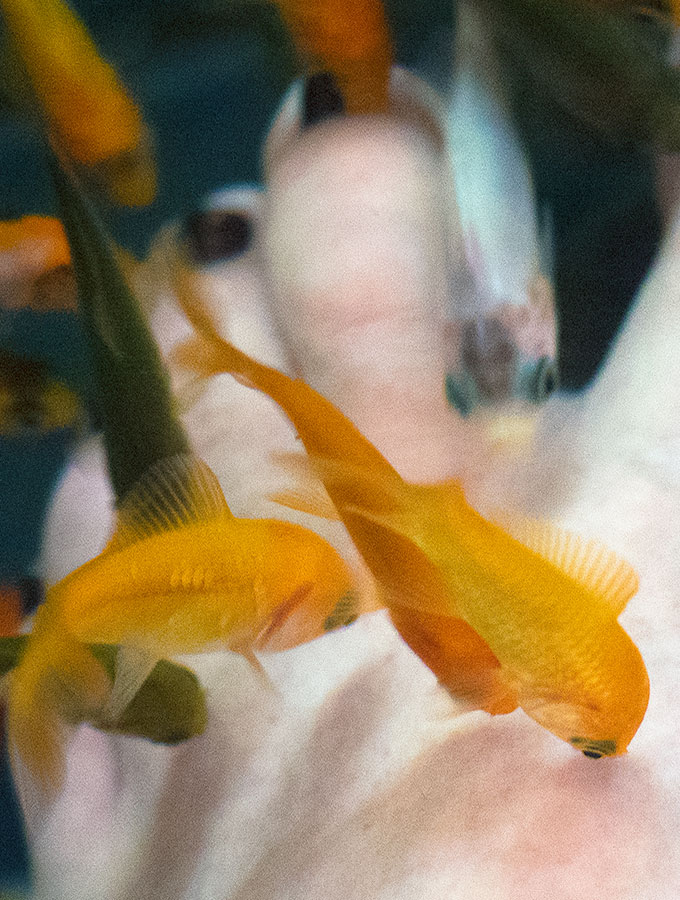 Is a Dr Fish pedicure safe?

As garra rufa do not have teeth, they are only sucking and gumming the dead skin from your feet. What if garra rufa aren’t being used and they have substituted another breed that have teeth? Apparently Chinese chinchin fish resemble the garra rufa and have been know to be used in fish pedis. These guys have teeth, which means they have the possibility of breaking the skin, drawing blood and spreading infection.

Water can also harbour all kinds of bacteria, therefore you really do need to take into consideration the Dr Fish setup you are using. The one we visited appeared very clean, with very large pools of what seemed to be fresh clear and clean water.

It has been advised to avoid a Dr Fish pedi if you have an infection on your feet, broken skin or wounds on parts of your body that will be submerged in water. Avoid if you have any kind of skin disease or suffer from Hepatitis C/B or HIV, a low immune system or have shaved/waxed your legs recently.

I must note that nobody checked my feet, or anyone’s, before being submerged into the water to be nibbled. Those same fish nibbled on somebody before me and would nibble on somebody again after me. 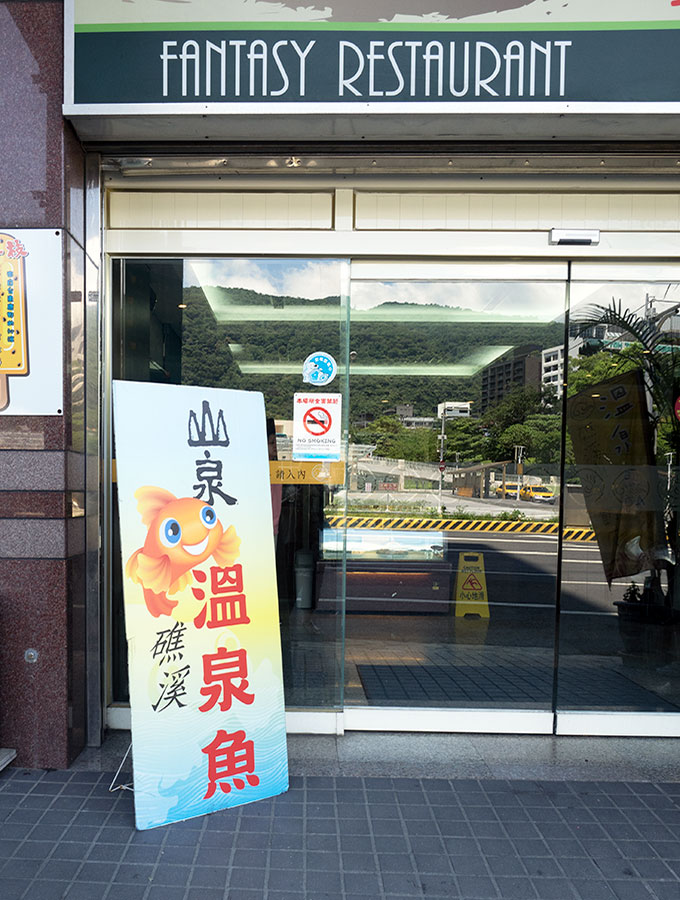 Fantasy restaurant for the fish???

What about the fish?

Is a Dr Fish pedi cruel? You are thrusting your large smelly feet upon the faces of tiny little fish as their only source of food. Their diets consist of dead skin, the odd wart, mole and hang nail. Then yes it could be considered cruel, I know I wouldn’t want to swap my life with the one of a garra rufa.

I have read that the fish are starved and that is why they eat the dead skin from your tootsies.

Head to another page recommended by Mr Google and I read a different account. This particular person experienced them feeding the fish during their pedi to encourage them to stick around to continue gumming their feet.

Would I do it again? I wouldn’t go seeking the experience, I think humans do a far better job. I was as healthy after my Dr Fish pedi as I was before, and I still haven’t found any case of somebody contracting anything from this kind of pedicure. What if I found myself in that situation again? As they say, when in Rome….

Would you ever have a Dr Fish pedi?