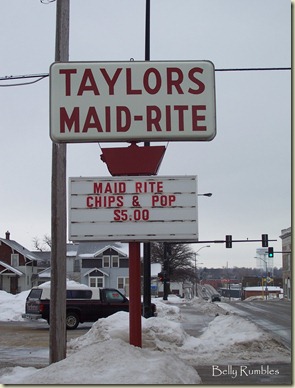 In January I excitedly visited my good bud Madame Iowa in her home town of Marshalltown, Iowa.

Now being a lover of all things edible the first thing I did after booking my tickets was to start searching the web for what Marshalltown had unique to offer in the way of the digestible.

Low and behold I came across the 80 year strong Taylors Maid-Rite and their loose meat sandwich. When I told Madame Iowa of my desire to go to Maid-Rite, she didn’t really understand why I was adamant on going, breathing “bloody Aussie” under her breath and I could feel her shaking her head at me on the other end of the phone.

She finally understood when I said “but Madame Iowa, we don’t have loose meat sandwiches here is Aus, I have to try one!” The promise was made to take me, yay!

When I eventually got to Marshalltown, I happened to arrive during their worst winter in ages. The weather had warmed up slightly when I got there and was no longer –22 degrees C, but it was still freezing. Snow was everywhere, the lakes were frozen and I was in my element, smiling the whole time. Madame Iowa just continued to shake her head at me every time I would go “ooooo look at the icicles hanging off that road sign/building/car etc”, “wow he is salting the street”, “oooo look the water in the gutter it’s frozen” and “ice storm, way cool”. Her response generally was “stupid bloody Aussie………(mumbled under breath), followed by “Sar, just don’t slip on your arse!” as I would try to capture all this on my camera. 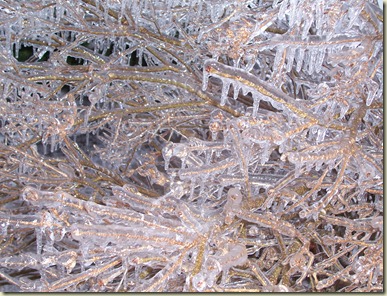 The day we went to Maid Rite there was an ice storm. Schools had been closed for the day and it seemed that nobody but Madame Iowa and I were out and about. We had to drive at about 20Km/hour around town as the roads were pretty iced up. 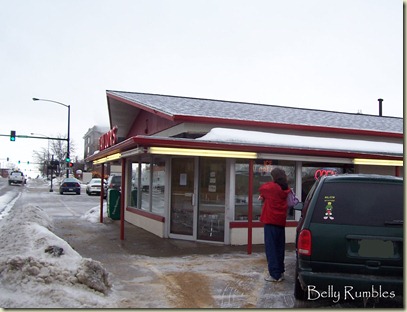 Now, if you are not aware, Americans call burgers “sandwiches” but you get use to the weird way they speak and how they call things (sticks tongue out at Madame Iowa as she reads this post xxxx). So in fact the loose meat sandwich is a loose meat burger.

We arrived safe and walked in to the diner, it is just so retro USA, I loved it. You are taken back to the 50s. I don’t think they have renovated since then, it is classic. We sat at the counter on our red padded bar stools, very cool. A Taylor's Maid-Rite is a loose meat sandwich made of finely minced meat or finely ground hamburger if you are American. The mince is cooked and put in a bun, then served with mustard, pickles or chopped onions. You can have your meat either wet or dry. Wet has more juice to it and apparently keeps you more than regular, we went for the dry option. 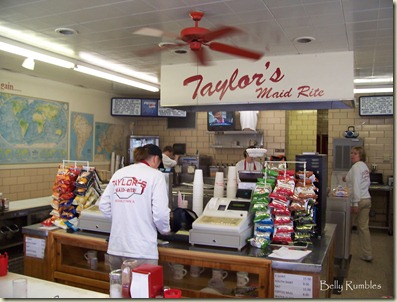 No cheese, no fries but now after 70 years ketchup/tomato sauce is available on the counter to add yourself if you desire.

There are about 6 shake flavours and I went for one that to me screamed USA and was a flavour for shakes we don’t find in Australia, peanut butter. The guy serving us asked me if I liked peanut and jelly sandwiches, “sure” I said, “who doesn’t”. So he said he would put a drop of raspberry flavour in with my peanut butter, assured me that it tastes fantastic and that if I didn’t like it he would make me a new one. The other staff were in disbelief that he was going to make me one.

They have sweet pies as well but we opted just to go for the sandwiches and shakes. 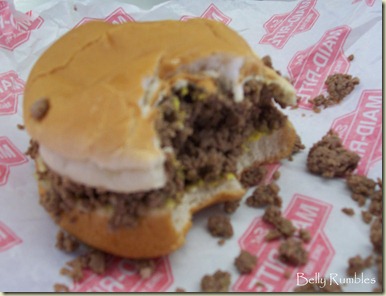 The sandwiches and shakes arrived, with our server pouring our shakes for us in to small glasses from their large silver milkshake containers. The weeks heading up to my arrival Madame Iowa had said she would pour my milkshake for me so I wouldn’t make a mess. Errr, think I can do it myself?? Now I understand, the shakes are what we would call a thick shake. These shakes are pretty solid so there is a bit of technique to it, shimmy and shake and you are right, get the technique wrong and you have ice cream mess everywhere. I am proud to say I was able to refill my glass and impressed the locals. 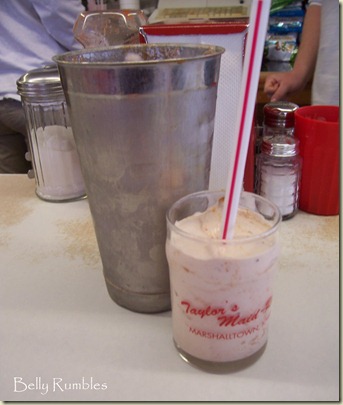 The sandwich/burger was actually really nice. I sprinkled a little salt on the mince, seemed to be the thing to do, and it did actually need it. They don’t add flavour or spices to the mince and they grind their own.

My peanut butter and jelly shake tasted as described, the raspberry syrup they use is really like a jam, thick and sweet and I think it actually was peanut butter not a syrup that was used. They are a meal on their own and very filling. The guy who made my shake was happy I liked it and did a bit of a “told you so” to his fellow work mates. If you get to Iowa, it is worth a visit. There are a few franchises around beside the one in Marshalltown. They also deliver anywhere in the USA, seriously!