How to cook live Australian yabbies?  I spontaneously picked some up from the Sydney Fish Markets and find out the hard way.

I am beginning to write this post before I actually do the deed of cooking the live yabbies which we purchased this morning at the Sydney Seafood Markets.  I went into this project quite gung ho and thought that it wouldn’t affect me.  I am wrong.

I love animals, very very much.  I can’t watch a Lassie or Benji movie.  I balled my eyes out in I am legend when Sam got infected and killed (please feel free to insert any similar movie plot line).  I don’t kill spiders I relocate them and I shoo bees out of the house.  Every time a possum, goanna, blue tongue lizard or any other animal, bird or reptile graces my backyard I am like an excited five year old.

I am not a vegetarian.  I love cows, I find them a gorgeous animal with giant brown eyes, but I also find them delicious, medium with a good béarnaise sauce.  I accept and am happy with the fact that humans kill animals to eat, to kill an animal for just sheer pleasure, because it annoys you or to get your kicks I have a serious issue with.

I have eaten at restaurants where you walk around, choose your live seafood and it is then cooked for you.  For some reason, this is a little different, but I am not sure why.

The yabbies have been home for about an hour now, living in the kitchen in an esky with a little water in it and I have already started to get attached to them.  Crazy, I know!  There is one guy, in particular, every time I look into the esky in the kitchen he looks up at me.  He almost seems to be trying to say, “Hey, I am a really nice guy and we could live together quite happily.  I am no maintenance, really, and would be the perfect pet.  Please don’t eat me” 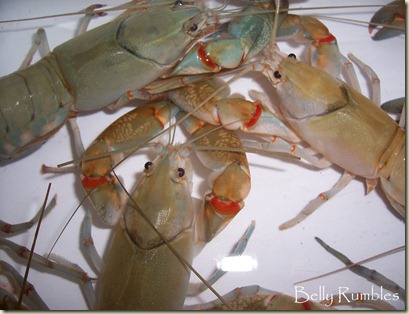 On the other hand, he could be looking up at me each time and saying “Hey bitch I am going to get you before you get me” and planning his great escape.

Now you are all probably saying, “why on earth did you buy live yabbies, ya ning nong”.  Well I could not find them already cooked, nor have I ever seen anything but the live ones.  I assume like other crayfish or crabs, once cooked and sitting around they start to lose their sweetness and taste, these crustaceans are best eaten just cooked.

Also I don’t believe there is a very high demand for cooked yabbies like there is for crabs and lobsters and therefore nor would be the turnover.  I can purchase yabbie meat like crab meat in a jar, but I wanted the whole yabbie.  Live was my only option.  But how to cook live Australian yabbies?

I have been wanting to try them at home for quite a few years.  I have had foods with yabbie in them but never had whole ones before. 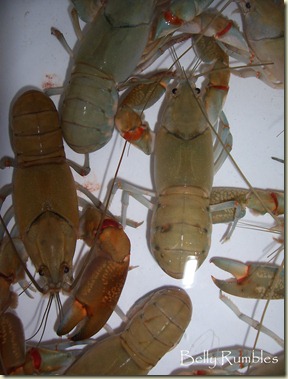 So now I am contemplating on how I am going to cook them with as little stress to them (and me) as I can possibly manage.

Option 1:  Place in freezer for 20 minutes to put to sleep and then drop into rapidly boiling water.

Option 2:  Steve Manfredi suggests via an article he wrote back in 2005, to place in the fridge for an hour or so to make them sluggish and sleepy, then drop into the rapidly boiling water.

Option 3:  Dump a bag of ice in the esky to put them to sleep and then drop them into rapidly boiling water.

According to Stephanie Alexander in the Cook’s Companion, “yabbies cannot be alive and screaming as they hit the hot cooking liquid.  If they are, they will thrash about and struggle and, even ignoring any possible psychological trauma to the cook, the yabby flesh risks becoming pasty.  As yabbies go to sleep when they are cold, chill them for an hour or so before cooking.  They will slide into the cooking liquid and die instantly without suffering and without loss of condition”.

Good God!  If just reading about the thrashing and screaming wasn’t enough I continued reading what she had to say “Because the yabbies one buys are already purged there is not much grit in their intestines.  In Europe it is common practice to extract the intestinal thread of freshwater crayfish by twisting it out of a live creature, which is held firmly while this bit of torture takes place…”  No twisting of my lil guys it will be cold induced sleep for them.

I then referred to my cooking bible “Larousse Gastronomique”, but as I thought yabbies do not get a mention.  This is fair enough as “yabbie” is an Australian term.  Yabbies are an Australian freshwater crayfish so I referred to the crayfish section.  Lots of lovely recipes but no reference on how to humanely cook them.

I decided to try two methods of sedating them before cooking.  One lot were placed in the fridge for over 2 hours.  More than an hour is needed, after an hour they were still moving about plotting how to get out.

I then placed the other half in the freezer for 20 minutes.  This turned into more like 35 before they were “asleep”.

The time to cook them arrived.  I had a big heavy based pot full of water on the boil with some added salt.  Once it reached rapid boil it was time.

Junior and I were checking the yabbies to see if they were ready for the pot and all looked quite docile.  As for me I have sent Mac down to the bottle shop for another bottle of wine and was pacing around the kitchen a little beside myself.

The yabbies in the fridge were the first batch I cooked.  Fridge method worked well with all yabbies asleep. 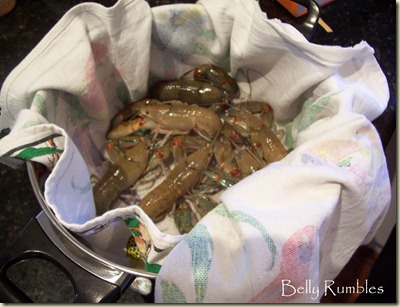 As soon as they come out of the fridge I try to get them into the pot as quickly as possible.  I don’t want them warming up and waking up.  Some of them do start to.  Once they hit the water of course they cool it down and my rapid boil dies.  I panic as I want them not to suffer as much as I can manage.  It took what seemed forever for the water to come up to a full boil again.  I was cooking seven yabbies in this batch.

Yes they do move when they are in the pot initially.  Reflexes?  Waking up with a rude shock?  Nervous system?  Trying to scramble out of the hot liquid to live?  (okay there wasn’t any scrambling as such).  Some of them did these little wiggle movements, air bubbles are released and then they start to turn orange.  It was at this time I wished I had a lid which was not made of glass.

They don’t take long to cook at all.  Three minutes on the boil and you are done.  I had a sink full of ice and water ready to plunge them into to stop the cooking process.  The first batch rested in that while I sent Junior to the deep freeze downstairs to grab the other lot. 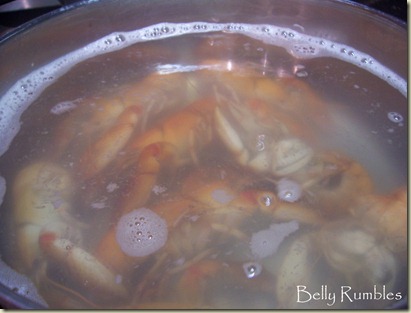 While he was doing this I changed pots to another large one which didn’t have a heavy base on it in the hopes that the water would regain its boil quicker than last time.

Junior had the next batch, there were eight in this group.  All bar one of the yabbie from the freezer batch were asleep.  The one that I think has been eyeing me off all afternoon is sitting on top of the others and still looking up at me and moving just, he is a determined little fighter. So quickly these guys went into the water for round two.  A couple did wake up a little bit more than the previous lot before they hit the water.  I continued forward and into the pot they all went.

Junior was drying off the ones which had already been cooled in the sink and the new batch were quickly added to the sink once they were cooked.

I think the fridge method worked better than the freezer one.

We plated them up as one side from the fridge and the other from the freezer.  I was interested to know if there was any difference separated the yabbies.

By touch there was a difference, the yabbies that had been in the freezer were more ridged than the ones from the fridge.

In taste both fridge and freezer yabbies tasted the same.  None were pasty which was a relief, more for the fact that they did not stress than anything else.

The taste was lovely.  Slightly sweet and mild flavour, a little bit like their larger cousins.

In the end I only had a few and Junior only had one.  For both of us we had lost our appetites a little bit by the time the whole process came to an end.  They tasted lovely that was not the issue.  Mac, on the other hand, loved them and scoffed the lot.

For me it was a harder journey to get them on the plate than I initially felt when we purchased them at the markets that morning.  It was that step where I played God that I think I had trouble with.  Happy with somebody else to do the “dirty work”, and shame on me for saying that.  I did it though, and funny enough that sort of makes me a little proud as well as, hmmm, not sure what, of myself, but it is a confused feeling.

As mentioned above I only had three of them (equivalent to three prawns).  I ended up having some warmed up leftover pizza from the freeze to supplement dinner, to the amusement of some.

Would I do it again?  I can’t answer that with a definite no or yes.  The jury is still out on that one, but we are not having them next Sunday for Easter as originally planned, i need a little time.