Why not add a delicious twist to your next batch of French Toast? Cornflake crumbed French Toast is crunchy on the outside and soft and scrumptious on the inside.

Three Williams is a very popular cafe in Surry Hills, Sydney. Famed for many dishes, but one of my favourites is their French toast recipe.

It is a very simple French toast recipe, not that there is anything difficult with the standard recipe. They coat the French toast in crushed cornflakes. This small tweak to a classic dish completely won me over.

This may turn a French toast purist off at first, but it really is sensational. Thick slices of buttery brioche bread are soaked in an egg mixture flavoured with maple, cinnamon and cardamom. This is then crumbed in the crushed cornflakes and fried in a copious amount of butter.

For Instagram picture perfection, the French toast is topped with fresh berries, vanilla yoghurt and maple syrup. The Three Williams add a handful of roasted pecans, I didn’t have pecans and decided to pretty it up even further with some freeze dried pink pitaya granules.

The below recipe is for one person, but I found I had enough egg mixture to soak two thick pieces of brioche. This French toast recipe has now become the firm favourite of mine to make.

The addition of the cornflakes really transforms a simple dish easily. The cardamom is also a surprising and tasty addition.

This recipe originally appeared in the cookbook Dish. It was created to raise money for The Starlight Children's Foundation. Unfortunately, the book is now out of publication and the cookbook's website seems to have been hacked.

Even though you can't buy the book anymore, at least I have had the opportunity of sharing this cornflake crumbed French toast recipe with you.

PIN ME TO EAT ME LATER 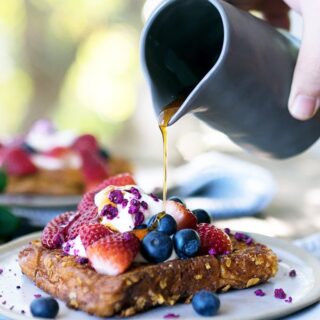 The addition of the cornflakes really transforms a simple dish easily. The cardamom is also a surprising and tasty addition.