Piragi are traditional Latvian bacon buns. Filled with sautéed onion and bacon. Made by my grandmother, myself, and now my son. This recipe is a family tradition.

I thought it only appropriate that my 200th post on Belly Rumbles is one about a food that is close to my heart.  Close due to happy memories, the deliciousness and the fact it is a family recipe.

A recipe that is passed down the generations in all households of Latvian descent.  Even today Josh whipped up two batches of piragi to share amongst his friends tomorrow as they partake in their gaming marathon.

It does make this mother proud that he does an amazing job and that his rolling of these little buns has almost reached my standard.

One of my earliest food memories was standing in my great grandmother's kitchen in Merrylands, Sydney.  My grandmother and great aunt would also be present.  It would have been school holidays, a day or two before Christmas Eve.  grandma would have been babysitting me while Mum and Dad were at work.

The kitchen would be full of glorious cooking smells, traditional delights being prepared for the family's Christmas Eve feast.  The table that dominated the tiny kitchen, would be covered with flour and piles of dough.  Nimble fingers shaped buns filled with bacon and onion perfectly.  I was witnessing a piragis production line, to which I was welcomed to join with open arms.

Piragi are a Latvian tradition.  Probably the most well know traditional Latvian food.  Small torpedo shaped buns filled with a bacon mixture.  Simple, but ever so delicious and smell incredible when baking.  What seemed like hundreds would be made from that kitchen in the lead up to Christmas Eve.

When the extended family was all together on Christmas eve, the piragi would disappear quicker than could be passed around.  Hungrily devoured by all.  There would be bags frozen to be given to family members to take home with them.  After a late night of celebrations the take home piragi then became an easy and traditional Christmas Day breakfast.

When my grandmother passed away, there wasn't a recipe in her handwritten cookbook for these.  Like a good Latvian girl I was supposed to have paid attention, and instinctively have known how to make these addictive buns.  Of course I didn't, and as Dad was a male he was never taught and no help.

Through memory, trial and error, I eventually recreated my family's recipe.  Even though Josh is now a master at making and shaping piragi, the recipe is written down for future generations.

Really hope you enjoy these tasty little buns of bacon as much as my family do.  Is there a traditional recipe that has been passed down through the generations in your family?  If there is I would love to hear about it. 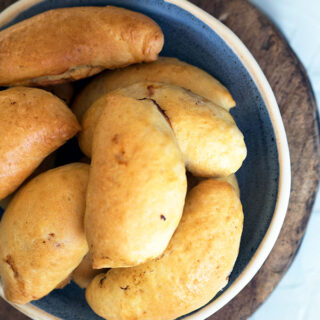 Calories: 57kcalCarbohydrates: 1gProtein: 1gFat: 5gSaturated Fat: 2gCholesterol: 17mgSodium: 179mgPotassium: 36mgSugar: 1gVitamin A: 60IUVitamin C: 0.4mgCalcium: 8mgIron: 0.1mg
Did You Make This Recipe?I do a happy dance when people share how they went. Tag me on Instagram or Twitter @bellyrumbles & #bellyrumbles