Chic Salmon and Cucumber Sandwiches for high tea. Quick and easy to make salmon and cucumber sandwiches that look amazing, sure to get your guests talking.

Isn’t it funny when the main event doesn’t become the star of the show? As soon as I saw these salmon and cucumber sandwiches at the Mandarin Oriental Taipei I knew I had to have a go at making them.

I had finished a lovely lunch at the Mandarin Oriental’s swanky Cantonese restaurant Ya Ge and was on a fast paced hotel tour. The Mandarin really is a stunning hotel and Ya Ge’s food exceptional.

This is where I spotted the salmon and cucumber sandwiches. They were part of the complimentary afternoon tea spread for Club Floor guests. These simple sandwiches stole the show.

It was the first time I had seen cucumber on the outside of a sandwich before, I thought it was a clever idea. A clever idea with a stunning result that is basic to make at home.

Most high tea fare, even though small, can take time to make. For the amount of time and effort that goes into making these pretty cucumber and salmon sandwiches, which is none, you end up with an eye catching sandwich. The perfect addition to a high tea selection.

In fact they would be the perfect addition to a Melbourne Cup spread. Perfect with a glass of champagne, don’t you think?

I use cream cheese as my “glue” to make the cucumber strips stick to the outside of the salmon and cucumber sandwiches. I feel it works best as it is white and matches the bread. It gives the illusion of nothing being there and lets the green of the cucumber stand out.

Of course, you could use butter, but the effect won't be as chic and clean looking. Also, you run the risk of the butter softening more than it should when the sandwiches are set out to be eaten. The result, cucumber slices sliding off and greasy fingers. Cream cheese is more stable.

You are only limited to fillings by your imagination. Chicken, crab and prawn fillings would all be just as delicious. Even the cucumber isn’t sacred with these sandwiches, have a play around with alternatives to cucumber. I thought that toasted sesame seeds could be quite eye fetching and tasty with the right filling, what do you think? 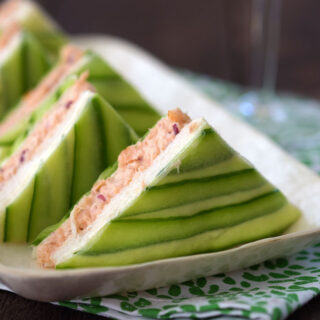 Did You Make This Recipe?I do a happy dance when people share how they went. Tag me on Instagram or Twitter @bellyrumbles & #bellyrumbles
« Witches Cauldron Cup Cakes
Tea Cup Cookies, edible craft with the kids »