This is a super easy Milo Slice recipe using Australian Weet-Bix.  It's a classic Australian recipe! Perfect for an after school or work treat.

I have to admit it has probably been a couple of decades since I have made a slice using Weet-Bix. For my American readers, Weet-Bix is an Australian breakfast cereal. The closest thing I can find to it in the States is Shredded Wheat and I’m not quite sure if it will substitute very well, but you could give it a try.

Weet-Bix slices are the kind of slice you make as an after school treat or for the school fete. For some strange reason last weekend I was craving an old fashioned slice, one reminiscent of my school days.

Maybe it was due to all the back to school advertising as the school holidays draw to an end?

The decision was made to really us the Aussie factor on my slice with Milo. This easy Milo Slice is packed with Milo flavour. The closest relative to Milo you will find in the USA is Ovaltine.

Let's be honest, it isn't a pretty slice, but it is pretty delicious!

The slice base is packed with its namesake, Milo. The icing is also made with Milo. To finish it off, I topped this easy Milo slice with a good sprinkling of Milo. Milo addicts are going to love this recipe.

As mentioned it’s a great slice as an after school treat. It also travels well, perfect for picnics, school fetes or any other occasion you want to take a sweet treat.

This recipe is based on the original Weet-Bix Slice recipe. The changes I made were to cut down the amount of sugar, swapping out margarine for butter and I obviously “Milofied” the recipe.

The slice has a crunch from the cereal and coconut but also has a chew factor, which I love.

I do hope you love my Milofied version of a classic Weet-Bix slice. If you end up making this super easy Milo Slice don’t forget to share it on social media and tag @bellyrumbles. 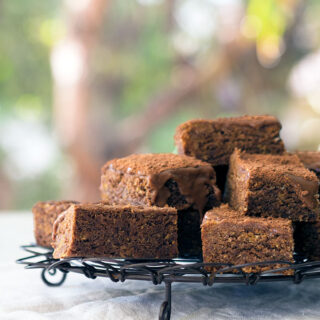 What are Weet-Bix? Weet-Bix are made in Australia by the company Sanitarium and are a popular breakfast cereal, or you could say cereal brick. The UK equivalent is Weetabix.  There is no real equivalent in the USA, shredded wheat breakfast "bricks" are the closest I have found. What is Milo? As far as I am aware Milo isn't available in the USA.  You can substitute Ovaltine, it is a similar product.  Not as good of course 😉  You can purchase Milo online.