This is a simple homemade Almond Roca recipe. Very similar to chocolate-covered English toffee. An easy to make almond toffee covered in dark chocolate, a sprinkle of sea salt and toasted almonds.

It is hard to believe that something that tastes this good is made from five ingredients. A recipe that pays homage to a favourite toffee candy of mine.

I do need to warn you that this recipe makes the most addictive toffee crack on the planet.

What is unusual about this almond toffee is that it is made from brown sugar and butter. For those of you that dread having to make toffee or caramel from white sugar, this recipe will bring you joy.

It is the crystalising of the sugar mixture that gives the set toffee its wonderful crunch factor. The crunchy shattering texture as you take a bite.

Why is this the best Almond Roca recipe?

That's a good question. What indeed makes my Almond Roca recipe superior to all the others out there?

In my usual style, I have tweaked the plethora of mainstream recipes out there to come up with something a little more decadent.

I take the boiling toffee candy mixture to the brink of burning. This gives it a wonderful deep flavour with a hint of bitterness. The final product delightfully retains the butter factor.

The almond flakes are toasted. By toasting the almonds you bring out their flavour. It increases the nuttiness of the Almond Roca recipe.

A sprinkling of salt flakes over the top of the chocolate also adds another wonderful dimension. The salty sweet factor we all love.

How do you know when your toffee is ready?

If you don't already have a candy thermometer in your cooking arsenal, I suggest you buy one.

After breaking so many of the cheap test tube looking candy thermometers, I now own one that looks like it is attached to a metal ruler. I also own a digital thermometer, but when making candy I like to leave the thermometer attached to the side of the pot.

The toffee needs to come to a temperature point just before the hard crack stage. Your bubbling sugar mixture needs to reach 145°C (300°F).

If you don't have a thermometer grab yourself a glass of iced water. Add a small drop of the toffee to the water. If it firms up straight away, you are good to go. If not, keep boiling a little longer.

Why is my Almond Roca chewy?

If you are using a candy thermometer you will be pretty safe from this happening. Trust the temperature guys.

If your almond toffee ends up being on the chewy side it means it hasn't come up to the right temperature. Don't panic if it is chewy, it will still be delicious.

The biggest pressure point you are going to have with this Almond Roca recipe is getting your toffee candy to the right temperature. All without burning or panicking that you will.

This toffee needs to be stirred. It will go against all you know in regard to regular toffee making with white sugar. If you don't stir, the mixture at the bottom of the pot will catch and burn.

As this is a toffee recipe using brown sugar, it will instantly be darker in colour than one using white. Therefore it is hard to judge when to take the toffee off the heat from sight.

It will quickly go from the stage you need it to be (145°C/300°F) to burnt. Watch the temperature of the bubbling liquid gold like a hawk.

This recipe may not replicate the commercially bought Almond Roca completely. Which is a good thing, as it is far tastier.

Not only tasty but economical using basic pantry ingredients. You will end up with plenty of this chocolate coated almond toffee candy. This recipe is also a great one to have up your sleeve for homemade edible gifts. 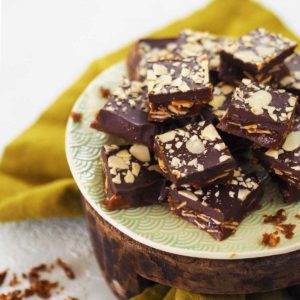 Testing the toffee without a thermometer If you don't have a thermometer grab yourself a glass of iced water. Add a small drop of the toffee to the water. If it firms up straight away, you are good to go. If not, keep boiling a little longer. Careful not to burn the toffee Make sure you stir the toffee mixture regularly while it bubbles away so it does not stick and burn. It will quickly go from the stage you need it to be (145°C/300°F) to burnt. Watch the bubbling liquid gold like a hawk. Toasted flaked almonds If you can't purchase toasted flaked almonds, they are easy to do at home and worth the effort.  Place almonds on baking sheet in an oven on medium heat.  Give them a mix every few minutes.  Make sure to keep an eye on them as when the start to turn brown they then turn very quickly.  They should toast up beautifully in around 8 minutes.