Ever wondered how to smoke pork belly? This is one of the easiest smoked pork belly recipes that you will come across.

You'll end up with melt in your mouth juicy pork, accompanied with easy apple fennel slaw. This is all wrapped up in super quick to make BBQ flatbread. The hardest part of this recipe is the slaw, and that isn't hard at all!

If you think you are experiencing a mild case of déjà vu, let me reassure you, you're not. This recipe and accompanying video were created a while ago for a cooking competition I was involved with.

The apron I'm wearing states I'm a Kitchen Star, but I don't think I am. They made me wear it, but hey, it has my name on it. Sadly I didn't win, but I do think this is a winning recipe.

Besides the BBQ smoked pork belly, there are a couple of other elements for this recipe. While the pork belly looks after itself on the bbq they are easy to whip up.

The rosemary flatbread cooks on the bbq within a matter of minutes while the pork belly rests. The apple and fennel slaw, and the walnut crumble, can be made earlier in the day or while the pork cooks. All in all it is a rather fuss-free and scrumptious meal.

How to smoke pork belly easily!

Fancy smokers need not apply for this recipe. Though, of course, you could use one.

I do own a smoker, which I love and it gets a lot of use. For this recipe, I always use the BBQ. Your BBQ will need a lid and the ability to be turned down to a low heat.

If you don’t grow your own rosemary have a chat with your greengrocer. You may find that he has some heading to the bin as generally, these thicker woody pieces are of no use to him.

Which brings me to the lip-smacking marinade. A BBQ sauce based marinade that has the addition of fresh orange juice, soy sauce, and much more. The beauty of this marinade is the simplicity, the ingredients simply need to be whizzed in a blender.

With the use of a mandoline, the apple and fennel are thinly sliced in no time. The slaw can be prepared earlier in the day and kept in the fridge until needed.

A three ingredient sprinkle, or I suppose you could call it a condiment. Only three ingredients, walnuts, golden raisins and green onion. Simple but it adds a flavour and textural crunch to the smoked pork belly.

The flatbread couldn't be simpler to make. Only three ingredients, flour, yoghurt and rosemary.

Make the dough while the pork is cooking and let it rest. Roll into balls, flatten and then cook these on the hot plate of the BBQ while the pork belly is resting.

If you don’t feel like making bread, why not purchase some flatbread from the store? Warm them up in the oven when you are ready to serve the BBQ smoked pork belly.

There is one last very important thing you need to know. The smoked BBQ pork belly smells amazing when it is cooking! Your neighbours are going to go insane with food envy.

Rainbow Trout Wrapped in Prosciutto - tasty can't get any easier!
Australian BBQ Prawns - the ultimate shrimp on the barbie
Beer Can Burgers - so much tasty fun (oven baked or bbq)
Quinoa Tabouli Salad - a whole lot of healthy on the side 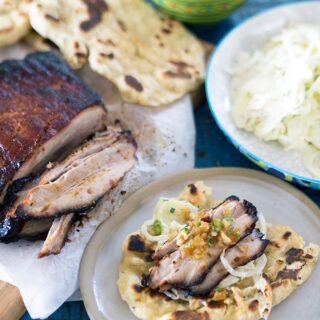 Recipe Author: Sara McCleary
VIDEO FOR THIS RECIPE IS AT THE TOP OF THIS POSTMelt in your mouth slow cooked Smoked BBQ Pork Belly with Apple Fennel Slaw and super quick and Easy BBQ Flat Bread. The hardest part of making this recipe is the slaw, and that isn’t hard at all!RECIPE MUST BE STARTED THE DAY BEFORE
5 from 2 votes
Print Recipe Pin Recipe
Prep Time 10 mins
Cook Time 2 hrs 5 mins
marinate in the fridge over night 8 hrs
Total Time 10 hrs 15 mins
Course Main
Cuisine BBQ
Servings 10
Calories 1460 kcal