Jewish penicillin, or more humbly known as chicken soup. A made from scratch soup recipe, which will give you a hug from the inside when feeling worse for wear.

You may want to take a look up at the original posting date of this article, it will be a decade old this year. Keep reading below for the original article, terrible photos, but sans horrid spelling mistakes. Oh how my writing voice has changed!

I am sort of laughing to myself as I write this post, the reason being is that there has been a bit of a ruckus caused in the blogger community lately by a person stereotyping food bloggers.

Well, a few months back I was trying to work out how to approach a girlfriend of mine to see if she had a chicken soup recipe.  You see, Nic is Jewish.

I was worried that when I asked her if she had a rocking chicken soup recipe I could try, and blog about, she would tell me that not every one of the Jewish faith have a chicken soup recipe. That I watch too much television, I should wake up to myself, and not stereotype the Jewish community.

We all have heard that Jewish Chicken Soup is the ultimate chicken soup. It cures all ills and is called Jewish penicillin.  With winter here what better time to cook a batch up. Especially as every second person around me seems to be sick!

Luckily for me she was more than willing to share her chicken soup recipe with me, only one problem, it was all in her head.

Nic told me she would need to sit down and drag it out of her memory banks to give to me.  The fact that it was all in her head made me even more excited about getting my hands on it, this is a recipe that you obviously learn in your mother’s/grandmother’s kitchen.

I am delighted to share this awesome chicken soup recipe with you.  I have actually put Nic’s comments in italics throughout the recipe, because as she puts it

“it's the little tips that make it Jewish'“

I used one whole chicken, as I happened to have one and then some extra wings and legs.  Nic suggests,

“You can use wings or legs, although these do tend to fall apart, but then you can pour the soup into a sieve - if you want chicken pieces to eat, use thighs - keep them whole so you can take them out if you strain the other bits and cut them up later!”

I cut my celery and carrot up into large bite size pieces to be retained to add back into the soup after straining.  If you don’t wish to do this you can put them in whole and discard.  I suggest you use them in the soup.

I actually cut the onion in half and shoved a toothpick through it to hold it together for a bit more flavour and then removed from the soup before serving.  Nic suggests,

”Do not leave this in the soup to eat later.  Take the outer layer of the skin off, but leave the bulb intact carefully slice the roots off, otherwise, it will fall apart in the soup”.

I didn’t use giblets as my local chicken shop didn’t have them, but next time I make the soup I will give them a go.

”If you're really game, you can use giblets - about ½kg (make sure you wash them and use a small knife to thoroughly clean them - any green area or grit)."

"Don't tell me what they are, I'm not interested in knowing - I love them, but have avoided all these years really delving into the finer points of what part of a chicken they are) and that's all I'll say on this point”.

“Osem Chicken Soup Mix (in kosher sections of Franklins or Coles) or alternatively, Massel Stock Cubes (chicken of course!). This is purely for the salt factor/taste - us Jews love our salt (and smultz {chicken fat}, but that's another story)”.

“Put everything into a large pot/pressure cooker and add lots of water (do not brown the chicken - it will change the taste of the soup)”.

“Boil the shit out of everything (or under pressure - about half an hour), or longer if you are just putting on the stove”.

Once the soup had been cooking for a couple of hours (I used the stovetop), I picked the chicken pieces out of it and put to the side.  Then strained.

I returned the carrots and celery to the soup and set it all to the side off the heat while I removed all the chicken meat from the bones.

The fat was then skimmed from the soup before adding some of the chicken back into the Jewish penicillin.  I wasn’t as particular as normal about removing every tiny bit of fat and did leave some due to Nic’s comment about smultz.

I ended up with far more chicken than was needed, which was great as it was used for sandwiches and other things.

“Skim the surface of fat when done, a lot of people cool down and put in the fridge overnight so the fat on the surface hardens, much easier to remove”.

“When the soup is ready to serve, my grandmother, mum and I, put heated (frozen) peas and lochen (pronounced Lock Shen - Yiddish word for noodles.  Angel hair pasta is great, make sure you snap into little pieces before boiling (do not boil in the soup, but in a separate saucepan)”.

I didn’t read the recipe properly and just added the peas straight from the freezer to warm up in the soup which I had now returned to heat.  I added the dry pasta straight to the soup to cook as well, I missed the bit about using a separate pot.  It worked fine and I just simmered very gently until the pasta was cooked through and served.

“If the taste is a little watery - just keep adding stock cubes and salt!!!!!  Serve”.

“It's obviously a lot easier than my theatrics, but I suppose it's the little tips that make it Jewish”.

Thanks Nic for sharing Jewish penicillin, aka Jewish chicken soup recipe with me and allowing me to share it with my readers.

The soup is just delicious.  I love the flavour that is absorbed by the vegetables cooking away in it, it just adds that something extra to the final soup.

PIN ME TO EAT ME LATER 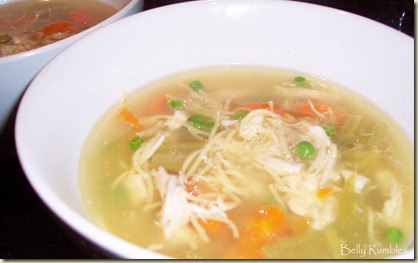