A heavily glazed baked ham is a sight to behold. As much as I love ham it is the glaze that wins my heart. Last year I made a dark and stormy glazed baked ham, which was a big success with readers. This year I kept the booze factor and took some summer inspiration with peaches.

If you have any issues finding peach jam, I have a great recipe for peach and bourbon jam which is perfect for this recipe.

For the perfectly glazed Christmas ham there are two factors to take into consideration, the ham’s fat layer and the glaze. The rendering of the fat layer with the glaze’s sugars caramelise together for a sticky deep glorious sheen.

It may sound strange to say that this peach and bourbon glazed baked ham is finger licking good. I tend to leave that one for chicken wings. But pieces of ham were carved and greedily picked off the plate while photographing this beauty. With fingers being meticulously licked till clean not wanting to waste a drop of that precious caramelised glaze. It’s just so tasty.

My favourite part of a well glazed baked ham has to be those sticky charred pieces of ham. I will fight anyone for those! What about you? 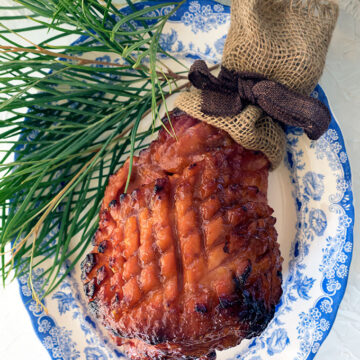 Calories: 29kcalCarbohydrates: 4gSodium: 3mgSugar: 3gVitamin C: 0.1mgCalcium: 2mg
Keyword glaze for christmas ham, how to bake a ham
Did You Make This Recipe?I do a happy dance when people share how they went. Tag me on Instagram or Twitter @bellyrumbles & #bellyrumbles
134shares
Previous Post: « The Dining Room at The House on Sathorn, Bangkok
Next Post: Port and Chocolate Christmas Cake »